Why ex-IG implicated me in Offa robbery, Saraki explains in recirculated video 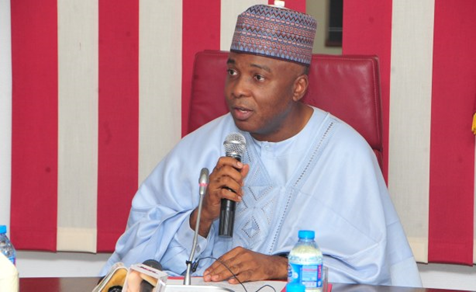 A video, which was again recirculated on the social media on Wednesday, has seen a former President of the Senate, Dr. Abubakar Bukola Saraki, explaining to the people of his home state, Kwara, why the then Inspector General of Police, Ibrahim Idris, allegedly implicated him in the robbery in Offa area of the state in which several persons, including policemen, were killed.

Saraki, in the video, addressed some people in Offa, mainly religious leaders, after a meeting with the Olofa of Offa, Oba Mufutau Muhammed Oloyede Gbadamosi, Okikiola Esuwoye II.

The former two-term Governor of Kwara State said in the video in which he spoke largely in Yoruba shortly before the 2019 elections: “The love of God made me stand here today, because you must have heard in the radio propaganda about the Offa robbery.

“I am grateful to God that that day, as I told our king, I was in Abia State on the day of the incident for the thanksgiving of one of our senators.

“When I received a call that our people have been killed, I left Abia State immediately.

“I came straight to Offa, even before the governor got here.

“That’s the extent of the pain I felt when I heard of the incidence.

“We got to the palace and Kabiyesi demanded for two things: A Mobile Police Unit and APC.

“Immediately I called the IG right in the presence of the Kabiyesi and he promised to do it after he told me then that his boys were amongst those killed too.

“Secondly, Kabiyesi said they shouldn’t close the banks like it was done in Omu Aran (Another area of Kwara State, where robbers struck in quick succession).

“I also called the CBN (Central Bank of Nigeria) Governor (Godwin Emefiele) that he shouldn’t close the banks like they did in Omu Aran.

“Offa is my territory o.

“We didn’t have a clash and I got back to Abuja the IG said senators were insulting him and I didn’t say a thing about it.

“That Dino Melaye was insulting him.

“I told him we are in a democratic era o.

“You can’t say they shouldn’t talk.

“That was how the fight started.

“That I didn’t support him.

“He reported me to the Aare that I was allowing people to insult him.

“I wrote him a letter saying the governor (former Governor AbdulFatah Ahmed) and I didn’t know anything about the issues.

“Before the opponent party starts to talk, where is the IG today (Idris had been removed and replaced by Mohammed Adamu then)?

“You cant stand on the truth and be faulted.

“I cant leave here without talking about it.

“That’s why I’m here because those we followed and suffered for, spent money also and all, see how they repaid us.

“We stand with God and nothing else and by His grace we will prevail.”