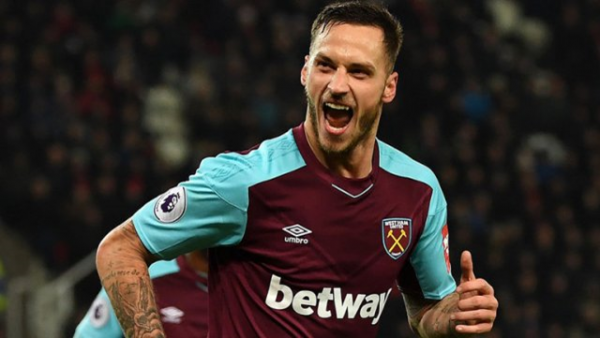 Marko Arnautovic says West Ham United cannot afford any more Jekyll and Hyde displays if they want to avoid a repeat of last season’s struggles.
The Hammers won just two of their opening 15 top-flight matches a year ago, condemning them to a campaign-long relegation battle they only won with two games to spare.
While West Ham often played well for parts of matches, their inability to produce complete performances regularly cost them points.
12 months on and the new-look Hammers have lost their opening two fixtures, despite again playing well in patches against both Liverpool and AFC Bournemouth.
A situation Arnautovic says has to change at Arsenal on Saturday.
“This Premier League is a challenging league and it’s not easy to play, but we’re happy to be here and happy to take this challenge.
“It’s going to be a difficult game,” Arnautovic was quoted as saying on the club’s website.
The striker who scored West Ham’s one and only Premier League goal so far in the 2-1 defeat by Bournemouth at London Stadium, noted that a win against Arsenal would boost the team’s confidence
He said: “We didn’t start the season well, hopefully we can start picking up points on Saturday.
“It’s important for the players, for everybody and for our confidence if we can win.
“But it’s not easy to play at the Emirates, so we’re going to see what we can do.
“Against Bournemouth, we did a good job in the first half but I think it’s still not enough because we need to be more clinical.
“If we had been more clinical, we could have scored more goals.
“But in the second half we didn’t create any chances; we dropped back and we can’t do what we did last season and play one half good and the other bad.”
He stressed that picking up points at the beginning of the season was very important, saying that it was a challenge the players were happy to take.
He said: “This Premier League is a challenging league and it’s not easy to play, but we’re happy to be here and happy to take this challenge.
“We know it’s only two games in, but last season we said ‘It’s only five games in’ or ‘It’s only ten games in’ and we struggled.
“So we need to pick up as soon as possible.”
Like West Ham, Arsenal are without a Premier League point after two matches, having lost at home to champions Manchester City and away to Chelsea.
Arnautovic, however, refused to believe Unai Emery’s Gunners have become a soft touch.
He has, therefore, urged his team mates to take advantage of any vulnerability at the Emirates Stadium where they take on the Gunners on Saturday.
“Arsenal lost twice, but they played against the champions and against Chelsea away, which was also not easy,” observed the Austrian, who scored in a 4-1 defeat at Arsenal last season.
He added: “They have a new coach and a new team and they are trying to achieve big things because they are a top club.
“But there is no reason why we can’t take points there because they are also human beings.”