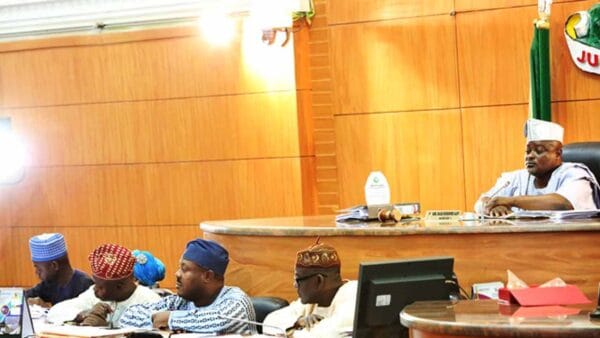 The Lagos State House of Assembly says it will support the delivery of the proposed Fourth Mainland Bridge project by the state government.
Abiodun Tobun, Chairman, House Committee on Works and Infrastructure, representing Epe I, made the assertion on Wednesday in an interview with the News Agency of Nigeria in Lagos.
NAN reports that the Fourth Mainland Bridge is a proposed 38km long bridge to connect Lagos Island by way of Lekki, Langbasa and Baiyeku Towns, across Lagoon to Itamaga, in Ikorodu.
Aramide Adeyoye, Special Adviser to Governor Babajide Sanwo-Olu on Works and Infrastructure, had said the state government had opened bids for prospective 39 firms that expressed interest in the construction of the bridge.
Tobun explained that the committee would immensely support the project in terms of funds to ensure it further ease gridlock in the state.
The committee chairman said it was a feasible project that would be achieved in the state.
He said: “The Fourth Mainland Bridge is a feasible project and it will be financed through a Public-Private-Partnership project where conglomerate will be invited to come and build it.
“The Fourth Mainland Bridge is still at the bidding stage, it has not been awarded.
“When the project is awarded then, the contractor will give us the work plan and schedule.”
Tobun also said that the state government was planning construction of another bridge through Ajah to Lucky Fibre in Ikorodu.
According to him, the move was to ensure that motorists coming from Ikorodu need not come to Ketu, but easily go through Lucky Fibre and redistribute to their routes.
Tobun said for motorists going to Epe, they could go straight and for those going to Itoki, they could go through those routes instead of going through Ibeju Lekki.
The lawmaker said with time, the BRT would be extended to Epe axis, while the state government would be looking for ways to exploit water transportation in the area.
Tobun said the state government could not do it alone because it had realised that it could only work on tax payers’ money.
He said there were individuals, companies or conglomerate that have the financial muscles to deliver the project on time to the admiration of the populace.
Tobun said that the state government also needs to regulate the toll gate charges so it could be reasonable to pay and be spread over the years for them to recover their money.
NAN.