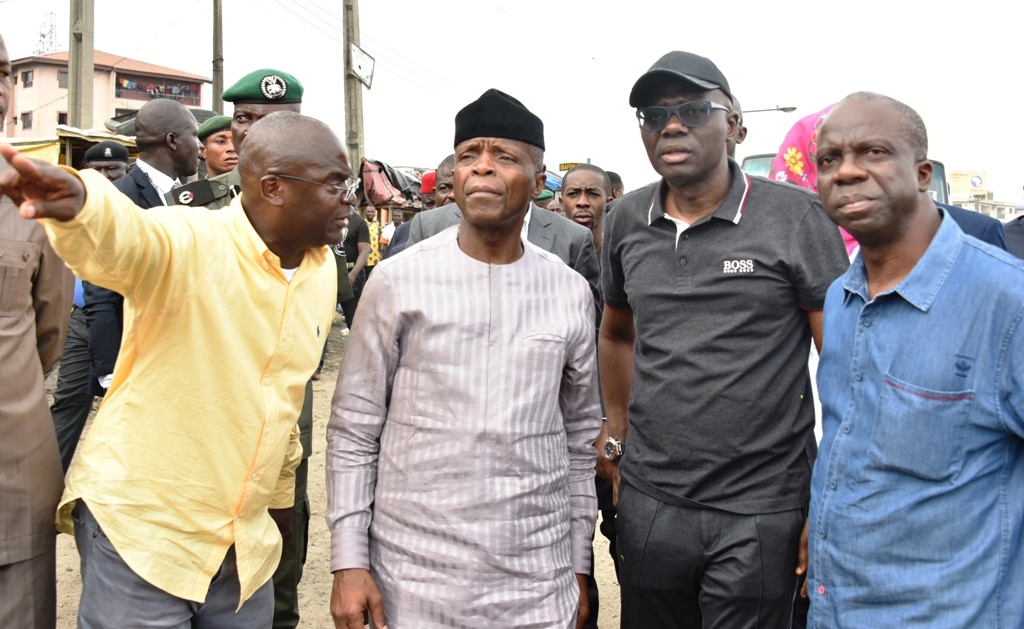 Efforts to decongest ports in Lagos State have been intensified with a visit to Apapa by the Vice President, Prof. Yemi Osinbajo (SAN), and Lagos State Governor, Babajide Sanwo-Olu, on Saturday.
The visit to Apapa was seen as a pointer to the readiness of the Federal Government to work with the Lagos State Government in finding lasting solution to the gridlock that has become an eyesore along the nation’s busiest ports.
Osinbajo, who is also the Executive Chairman of the Presidential Taskforce on the Apapa Traffic Gridlock, said the decongestion of the Apapa port and its environ remained the focus of the Federal Government, noting that the visit to the port was prompted by the need to assess the level of work being done towards solving the quagmire.
He said: “There are several aspects of the task that has to be done in decongesting the port.
“There have been a lot of infrastructure projects around the Lagos ports initiated by the Federal Government.
“Some of these projects have been completed, a lot are still ongoing.
“However, clearing the roads of trailers and oil tankers is the major issue that is of concern to the people.
“The good news is, there is a considerable improvement in this regard.
“The Mile 2 end of the Apapa axis is where there is some difficulty, but I assure you that in the next couple of days, it will be resolved, given the operation of Tin Can Island Trailer Park and the palliative work going on all the way down to Mile 2.
“We can all see that the entry to the ports is essentially clear.
“There are short term, mid and long term measures we are putting in place.
“One of our long-term measures is to decongest the cargo traffic coming in and out of the ports.
“Apapa port is meant to take 34 million metric tons, but it is currently doing over 80 million metric tons today.
“There is certainly a need to find an alternative and to expand.”
Osinbajo disclosed that there was an ongoing dredging of the Warri port in Delta State as part of the efforts to decongest cargo traffic in Lagos ports.
He added that standard gauge currently being constructed by the government from Lagos to Kano would be useful in the decongestion efforts in Lagos ports.
He said: “We should be able to get cargos out of the Apapa port, using the rail.
“The NPA is using barges at the moment.
“This is a very busy port and congestion is caused largely by constraint of space.
“In sustaining the effort, we are improving the capacity of other ports across the country and then improve the infrastructure around these ports.”
The Lagos State Government expressed satisfaction with the Federal Government’s effort to solve the traffic congestion around Apapa occasioned by influx of cargo and heavy-duty vehicles.
Sanwo-Olu said his administration would be ever ready to complement any effort by the Federal Government to ensure decongestion of the area in order to ease the pains of residents and businesses.
Also in the Federal Government’s team during the visit to Apapa were the Managing Director, Nigerian Port Authority, Hadiza Bala Usman; Executive Vice Chairman of the Presidential Taskforce on the Apapa Traffic Gridlock, Kayode Opeifa; Director General of the Federal Roads Maintenance Agency, Engr. Adedamola Kuti; and members of Nigerian Shippers’ Council.
Some of the projects inspected by the Vice President and Sanwo-Olu included the rehabilitation of Creek and Coconut Roads, cargo terminals and Tin Can Trailer Park recently built by the Federal Government.