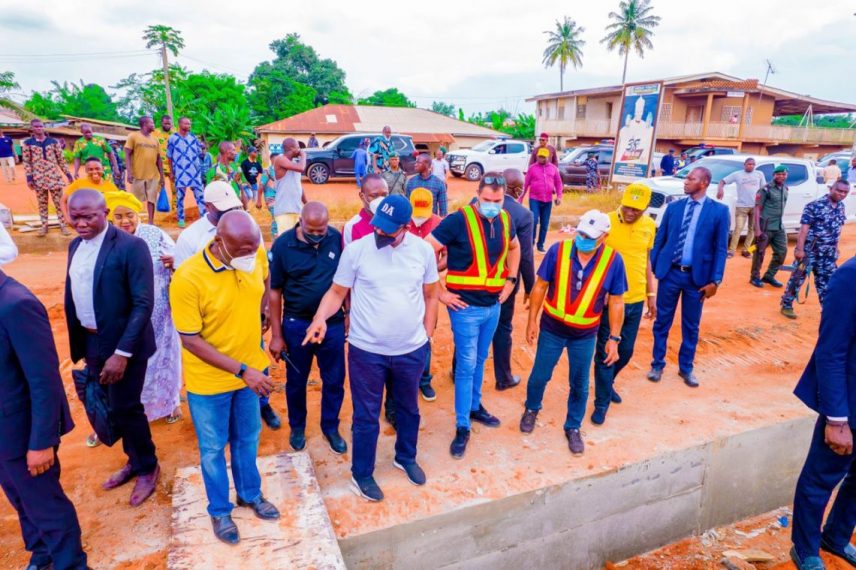 Ogun State governor,  Dapo Abiodun says his administration will not discriminate in the construction of roads regardless of their status as far as they have  potential that will promote economic activities in the State

The governor who stated this when he inspected the ongoing construction of the 25-kilometres Illisan- Ago-Iwoye road, said his government would repair or construct any road that would bring in more investors and enhance the economy of the state.

According to the governor,” we will ensure that roads, regardless of whether they are owned by federal or state are given attention. We will ensure that we repair or construct them so that we can bring people to our state to come and invest which will in turn enhance the economy of our state and people.

“This Illisan-Ago-Iwoye road is a Federal Government road but it is one of the roads we feel that we should construct. It is a road that crisscrosses about four local government areas. It is one that leads to our International Airport and our premier university, that is the Olabisi Onabanjo University and it is an economic road that leads to Oyo and Osun states.

“This road had been abandoned for about 12-16 years, thereby inflicting untold hardship on our people, and a lot of inconveniences to our students as well as affecting the economy of the communities along the road.

“The people don’t want to know whether the road belongs to the federal or state government. Each time they travel on a bad road, they geo-locate their pain to where their feeling is and as a responsive government, we are living up to their expectations”. Abiodun stated.

He said that the poor condition of the road had in the past affected the people who are mainly farmers as their farm produce perished before reaching the markets.

Abiodun expressed satisfaction on the level and quality of work done on the road.

“In the course of our campaign, we promised that we will do this road if we are voted for. Today, I am glad we have fulfilled that promise. Though this road is a dual carriageway, we have constructed one lane to ensure that at least a journey that takes about one and a half hour is now 15 minutes. It will also allow our people to take their farm produce to the market. This road has alleviated their pains and sufferings, and has now affected them positively, economically “, he noted.

The governor also stated that his administration has constructed the Ijebu-Ode-Epe, Sagamu-Abeokuta, and the ongoing construction of Atan-Lusada-Agbara roads, all, which belong to the federal government, maintaining that the roads are in line with the deliberate plan to ensure that development is equitably distributed to all parts of the state.