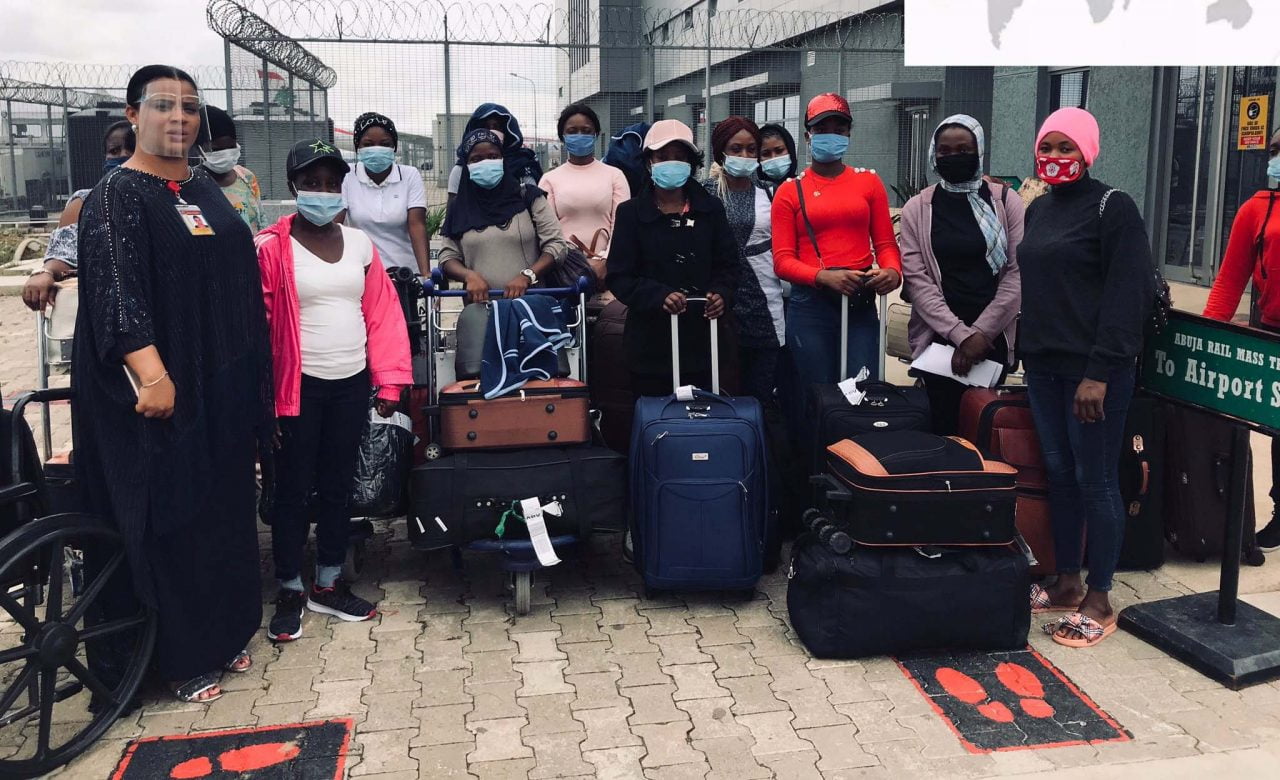 Pic.20. Some of the 72 Nigerian evacuees from Lebanon on their arrival at Nnamdi Azikiwe International Airport, Abuja, on Saturday (11/7/20). 29 of them are Nigerian girls working as domestic staff in Lebanon who had since wanted to return home, including Temitope Arowolo and Peace Busari who was put on sale in Lebanon. 03419/11/7/2020/BJO/NAN
Share
Facebook Twitter LinkedIn Pinterest Email

The National Agency for the Prohibition of Trafficking in Persons has vowed to go after those who planned the trafficking of Temitope-Olamide Arowolo to Lebanon.

Arowolo, an indigene of Oyo State, was the Nigerian lady whose video of ordeal of enslavement went viral on social media sometime in May and June.

Arowolo had alleged that she was been manhandled and given inhuman treatment where she worked as a maid in Lebanon by her enslaver, a situation that brought on her so many allegations by her boss.

The News Agency of Nigeria gathered that Arowolo’s refusal to allow the husband of her boss sleep with her, leading to her inflicting injury on him, led to her been charged for attempted murder and theft by the police.

NAN also gathered that Arowolo was in the custody of the police, where she released the video of her ordeal, which later caught the attention of the Nigerian Government.

NAN also gathered that the veracity of the video made the Nigerian Government to contact its Lebanese counterpart, and the country’s Ambassador to Nigeria promised to instigate the release of the lady.

Meanwhile, while welcoming her at the Nnamdi Azikiwe International Airport, Abuja on Saturday along with 71 others from Lebanon, the NAPTIP Director-General, Julie Okah-Donli, vowed to go after the traffickers.

Okah-Donli also said the victim was going to be rehabilitated by the agency in its shelter and thereafter be empowered.

According to her, Arowolo will first of all be quarantined for two weeks as the law stipulated  and thereafter she will be taken to the agency’s shelter.

She said: “We have to counsel her and rehabilitate her and thereafter empower her.

“The job of arresting her traffickers will be done after profiling her properly.

“We will counsel her and get necessary information from her that will lead us to the arrest of her traffickers for prosecution.

“We will ensure justice for her.

“None of the traffickers will go scot free.

“She is going to be an ambassador of NAPTIP.”

Arowolo, who spoke with newsmen about her ordeal in Lebanon, advised ladies to stay back in Nigeria and do whatever destiny has given them.

She said: “Going outside there was like a hell.

“Even not only Lebanon, but what I experienced at Lebanon, I pray for my enemy not to experience that.”