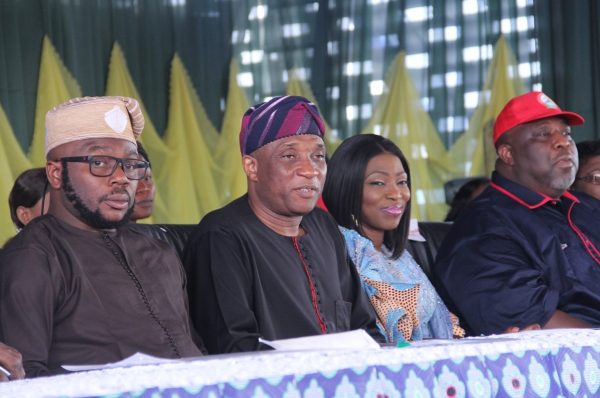 The Lagos State Governor, Akinwunmi Ambode, on Thursday reiterated his administration’s commitment not to fold its arms and allow the unhealthy practice of drug abuse damage the future of the youth across the state.
The Governor gave the assurance through the Secretary to the State Government, Tunji Bello, at the flag off ceremony of the Lagos State kicks against Drug Abuse, held at the Blue-Roof, LTV Agidigbi, Ikeja.
Ambode added that the increasing menace of drug abuse and its impact on the society in recent times is really on the high side.
He explained that the present Administration is committed to a more prosperous Lagos, making it necessary for all Lagosians to be united in fighting the monster that is capable of truncating the future of the youths.
He said the campaign, themed: “Lagos State Kicks Against Drug Abuse,” is a clarion call and a reminder of the responsibilities of individuals, organizations and the society at large to rise up to the occasion and safeguard the collective future of the youths, stressing that everyone must condemn the excessive self-administration of drugs without regard to medical prescription.
He said the decision to commence the massive awareness campaign in Lagos State is a response to the dangerous dimension that drug abuse has taken and a demonstration of the Government’s determination to nip it in the bud.
He added that the establishment of youth-friendly Centres in all the Local Government Areas/Local Government Development Areas is meant to serve as avenues for relaxation and to further engage the youths in productive ventures in order to reduce the menace of drug abuse drastically across the state.
He emphasized that the Drug Dependent Rehabilitation Centres located in Isheri and Majidun were established to give support to young addicts, adding that these centres are operating side by side with privately owned institutions, which are contributing significantly to the realization of this overall objective.
Earlier in her goodwill message, the wife of the Lagos State Governor, Bolanle Ambode, said the society cannot pretend that all is well, considering the unwholesome attitude of many youths who are drug addicts stressing that the scale and frequency of drug abuse has become a matter of concern that must be urgently addressed.
She said the responsibility of weaning the youths from drug abuse should not be left for the government alone but the parents have a big role to play in this because charity begins at home.
Also, in his welcome address, the Commissioner for Youth and Social Development, Hon. Agboola Dabiri, said recent statistics showed that abuse of drugs among the youths is increasing day by day, adding that youths abuse variety of drugs, which include inhalants (fumes from glues, aerosols and solvents); over the canter cough syrups – codeine, sleep and diet medications; marijuana and stimulants (cocaine, crack and speed) among others.