We will protect our in‎tegrity – NBA 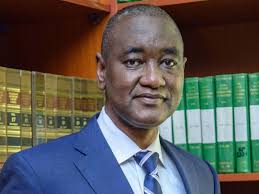 The President of the Nigeria Bar Association, Abubakar Mahmood, on Thursday said the association will not abdicate its responsibility in protecting the integrity and independence of the legal profession.
Speaking at the opening session of the National Executive Council of the NBA, holding in Minna, the Niger State capital, Mahmood, who acknowledged that the judiciary is currently facing a trying period, stated that the association will continue to be the voice of the voiceless.
He said: “We are conscious of the declining state of the legal profession considering the challenges and myriad of problems we are facing, but NBA will not abdicate its responsibility.
“NBA will continue to be the voice of the voiceless, we will speak for the judiciary and protect the independence and integrity of the legal profession, both the Bar and the Bench.
“We intend to fight and fish out the bad eggs in the system.”
The NBA President, who lamented the frivolous petitions brought against judges by lawyers, said he will ensure that there will be consequence taken against lawyers who write frivolous petition against judges.
He encouraged state governments to partner with the association to speed up some legislations that are needed for reforms.
Mahmood called on the Niger State Governor, Alhaji Abubakar Sani Bello, to look into the state of the Minna High Court, urging the government to work towards improving the maintainable and facilities of the court.
He commended on the state government on its efforts in the domestication of the administration of the Criminal Law Act, stating that state governments need to spearhead reforms that will be beneficial to the people.
In her address, the Chief judge of Niger State, Justice Maria Sanda Dzokogi, said the judiciary is currently passing through a trying period, adding that the Bench looks up to the Bar to be their voice and protect them.
Dzokogi urged them to use the meeting to address the issue of ethics, training and dress code, pointing out the need to ensure the legal practice is in tune with modern practice.
Declaring the meeting open, Niger State Acting Governor, Alhaji Muhammad Ketso, said the rule of law is the tripod upon which the instruments of peace, unity and justice stand in defence of all Nigerians, calling on the association to ensure the rule of law is adhered to.
Ketso said the administration is taking systematic steps towards having efficient justice delivery system in the state, adding that efforts are been intensified to adopt some critical prosecutorial documents on the code of conduct for prosecutors, policy on prosecution and guidelines for prosecutors.