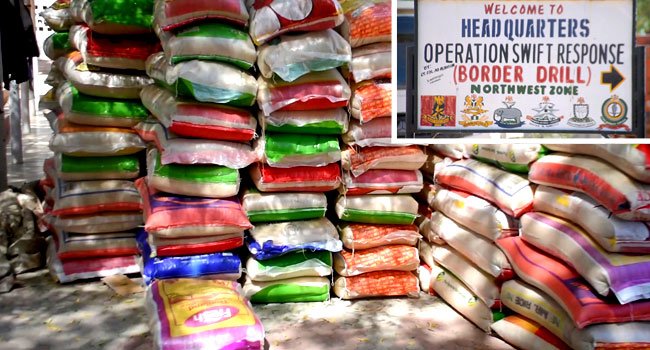 The Coordinator of the Sector 4 Command of the Joint Border Patrol Team in the North West and a Comptroller of the Nigeria Customs Service, Aliyu Mohammed, has said that operatives had to offer bandits seven bags of seized rice to save themselves.

Then Comptroller revealed this on Tuesday when he spoke at a news conference in Katsina State.

Mohammed said the bandits offered the rice were operating in Dutsinma Local Government Area of the state.

He said the operatives had entered the bush where the bandits were taking shelter, adding that it was the same route that smugglers used in bringing contrabands into the country.

He said: “We (the operatives) seized 37 bags of rice and the bandits asked for seven bags before allowing them to pass and save their lives.

“So, you see the risk we take, but people, especially those living along the border communities, engaged in attacking our officers.”

Reeling out the achievements of the Sector, Mohammed said it had intercepted contrabands with a duty-paid value of over N304,325,850.90 and arrested four smugglers in Katsina State from February 1 to date.

He called on the residents to always check the expiry date of any product before use as well as supporting the customs in the resolve to curb the activities of smugglers in the region.