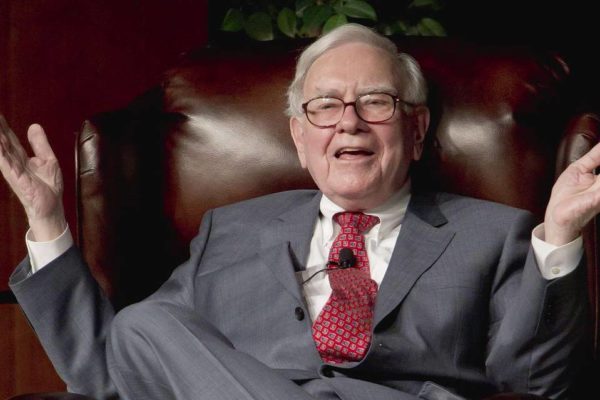 Share
Facebook Twitter LinkedIn Pinterest Email
Warren Buffett has reported a $1.14 billion loss at Buffett’s Berkshire Hathaway Inc. in the first quarter, the Omaha, Nebraska-based company said.
That marked the company’s first net loss since 2009.
The loss was caused by new accounting-rule changes, which the Oracle of Omaha had predicted would cause nightmares.
The rules require Berkshire to report unrealised gains or losses in equity investments in net income.
The “requirement will produce some truly wild and capricious swings in our GAAP bottom line,” Buffett warned in his annual letter to shareholders released in February.
The accounting change “will severely distort Berkshire’s net income figures and very often mislead commentators and investors.”
Buffett has said operating results are a better barometer of company performance, in part because Berkshire’s more than $170 billion stock portfolio can fluctuate from quarter to quarter.
Operating profit, which doesn’t include those changes, jumped 49 per cent to $5.29 billion during the first quarter as insurance underwriting swung to a profit after a difficult 2017.
A 16 per cent jump in revenue at auto insurer Geico helped the company turn an underwriting profit, according to a regulatory filing.
Geico was helped by rate increases that pushed premiums higher.
The railroad business also posted a gain in profit due to increased revenues per car as fuel prices rose.
Berkshire’s cash pile fell to $109 billion at the end of March from the record $116 billion at year-end, the first decline in two years.
Buffett has said that deploying that cash into new, large acquisitions is key to increasing earnings over time.
The first quarter’s drop was driven in part by spending more than $12 billion on more Apple Inc. shares.
The company reported the value of Apple its stake at $40.7 billion as of March 31, a jump from $28.2 billion at the end of 2017.
Buffett said in a CNBC interview that aired Friday that his company bought an additional 75 million shares of the technology company in the first quarter.
Berkshire said the fair value of its investment in Kraft Heinz Co. dropped by more than $5 billion to $20.3 billion in the quarter, as shares slipped almost 20 per cent.
Berkshire shareholders  gathered in Omaha for the company’s annual meeting Saturday, where Buffett and his business partner Charles Munger discussed everything from the economy to investing tips and even the pair’s wagers on certain companies.
Berkshire Hathaway Inc. LOSS Warren Buffett
Share. Facebook Twitter Pinterest LinkedIn Tumblr Telegram Email