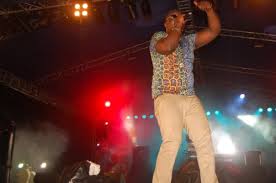 Self acclaimed Captain Mushin, Wande Coal, is presently in Amsterdam, The Netherlands for a concert to kick off on Saturday.
The concert, which is tagged Afrosensation, is already gathering momentum among the happening crowd of Nigerians who are set to witness the annual concert powered by Dido Events.
The event is expected to take place in Gein, the southern part of Amsterdam.
Coal got his break in the Nigerian entertainment industry as a dancer.
He continued improving on his vocal skills and got signed to Don Jazzy’s Mo’hits records in 2006.
Coal has also recorded tracks with other Nigerian artistes.
In 2012, following a fallout with record label Executivesm Don Jazzy and D’banj, Coal, Dr SID and D’Prince signed on to Don Jazzy’s new Record Label, Mavin Records, with the addition of Tiwa Savage from 323 Entertainment acting as the First Lady of Mavin Records.
Coal left Mavin Records in 2013.
In October 2013, he released a single titled: “Baby Face.”