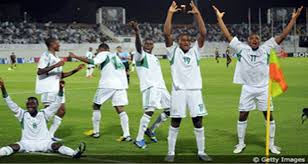 The Blue Angel abode of the Golden Eaglets in Lome was turned into a prayer ground on Sunday as the Nigerian Under-17 team once again committed their participation at the WAFU B Under-17 Tournament into the hands of God.
Though, prayer by both Muslims and Christians are usual routine before and after each training sessions that of Sunday was a bit special
since it coincided with the celebration of Easter. The team was led in prayer and worship by the coordinator, Prince Udofia who incidentally is an ordained pastor of Jesus Restoration Ministry in Port Harcourt.
Speaking on the lessons of Easter amongst other things, Udofia said his choice of topic – Being Thankful – for the occasion was apt in view of what the team has went through.
“We have to be thankful and give glory to God for what he has done for this team,” Udofia told the audience. “As a team, getting to this level has not been easy but we have to thank God for assisting us all this while and we must remain thankful at all times.”
Officials attendance at the Sunday’s worship included Coach Emmanuel Amuneke; Goalkeepers’ trainer, Emeka Amadi, who was once a student of Catholic Seminary; Team Physician, Dr. Deji Olarinoye; team’s Administrator, Tayo Egbaiyelo; as well as players of the Christian faith.
Udofia later disclosed that the players are ready for the task ahead and are rearing to go against Mali on Monday: “The morale of the team is good and the players are in high spirit. We don’t have any injury problem and having committed our participation into the hands of God, we are confident of victory against Mali on Monday.”