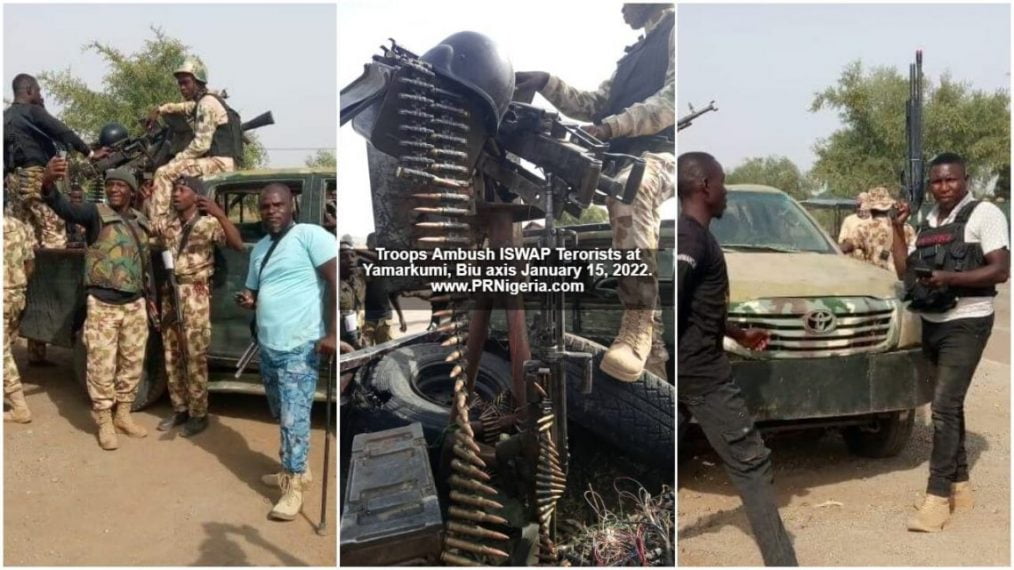 In what a senior military officer described as “sweet attack,” Nigerian military troops have eliminated scores of Islamic State of West Africa Province terrorists in the North East, PRNigeria reports.

The troops also destroyed some gun trucks and recovered a large cache of weapons from the insurgents.

PRNigeria gathered that the troops were alerted on the movement of the terrorists to attack Biu town in Borno State.

An Intelligence military officer, who pleaded anonymity, said troops were mobilised to the route, immediately they received the alert.

The officer said: “We cautiously mobilised the troops and stationed them around Yamarkumi, a village about 5km away from Biu town in the southern part of Borno State.

“Not only did the ground troops engage them, our Air Task Force also arrived timely and demobilised the gun trucks of the terrorists.

“Meanwhile, we have recovered huge weapons and ammunition from the terrorists.

“Some of the surviving terrorists fled towards Talala and Ajigin axis of Mandaragirau.

“But a Nigerian Air Force fighter aircraft engaged them.”

Recalled that ISWAP fighters have in the last few days sustained their attacks around Biu town.

They recently invaded the Nigerian Army Institute of War in Buratai village.

They also carried out a failed attack on Kautikari village, a few kilometres away from Biu.

Biu town is the seat of the Nigerian Army University established about three years ago by the former Chief of Army Staff, Lieutenant General Tukur Yusuf Buratai (retd).