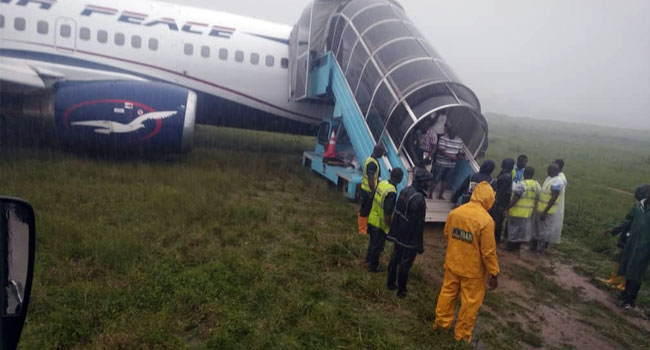 The Accident Investigation Bureau has despatched a team to investigate the incident of an Air Peace flight skidding off the runway at Port Harcourt International Airport in Omagwa, Rivers State on Saturday afternoon.
This was as a video of the incident, obviously recorded by a passenger, surfaced of the last minutes before the aircraft landed and overshot the runway.
Tunji Oketunbi, General Manager, Public Affairs of AIB, in a statement in Lagos said a team of investigators had been sent to the site.
The Air Peace Flight P47291 from Abuja to Port Harcourt overshot the runway while touching down at the airport under heavy rainfall.
Oketunbi said: “The AIB has been notified of the Air Peace flight from Abuja to Port Harcourt with 94 passengers and six crew members on board with Registration marks 5N-BRN.
“The aircraft skidded off the runway to the left about 1300m from the runway 21 threshold at the Port Harcourt International Airport.
“All passengers and crew have been evacuated safely. AIB has despatched investigators who are on their way to the site.”
The Chief Operating Officer of Air Peace, Oluwatoyin Olajide, had earlier attributed the incident to flooding of the runway.
Olajide said: “We confirm that Air Peace Flight P47291 Abuja-Port Harcourt had a runway excursion upon landing at the Port Harcourt International Airport on June 22 due to downpour.
“Our professional crew quickly recovered within seconds of the incident and the aircraft was successfully normalised.
“Our esteemed passengers on board the flight were calm during the incident and disembarked normally.
“Our team of experts and the authorities are currently reviewing the incident and we will give our cooperation for a thorough exercise.
“We apologise to our esteemed passengers for the inconvenience caused them and wish to assure them that we will continue to prioritise their safety in all our operations.”