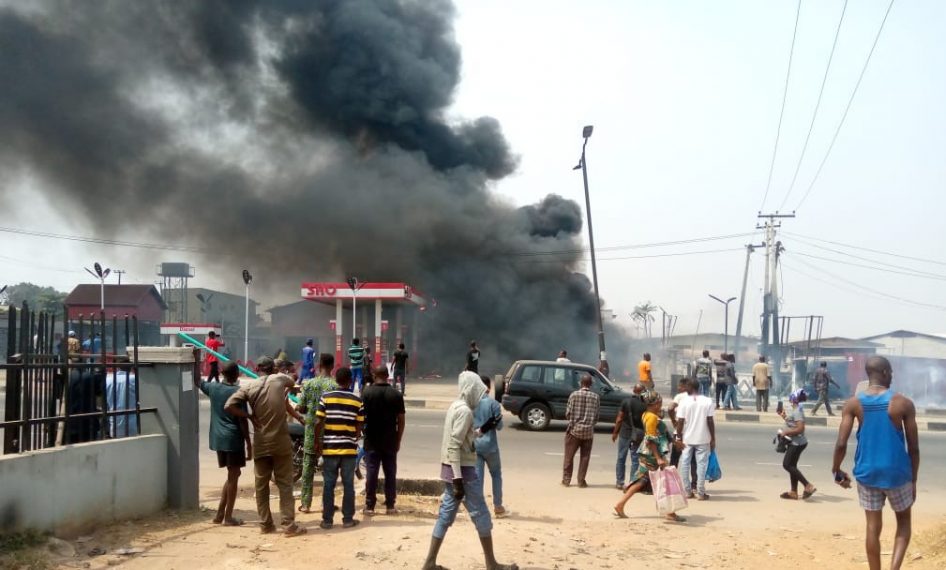 The News Agency of Nigeria reports that the incident occurred when the tanker was offloading its fuel content.

The content was being sent to the underground storage tank of the station.

A NAN Correspondent, who visited the scene, gathered that the fire also burnt a car parked beside the tanker.

Speaking to NAN, Akande Ajibola, an official of the Federal Fire Service in Ibadan, said his men rushed to the scene immediately they got information about the fire incident.

Ajibola said that they successfully put off the fire without any casualty.

According to him, the possible cause of the fire may be as a result of the heat from the underground tank.

He said: “Petrol stations are not supposed to be offloading fuel during the day time.

“It should be done early in the morning or at night.”

Ajibola listed other items affected by the fire to include a fuel dispensing machine, an aerial electrical transformer, auto care unit and part of a building within the premises of the station.

NAN reports that officials of the Nigeria Police Force and Nigeria Security and Civil Defence Corps were on ground to maintain law and order.

However, a NAN Senior Photojournalist, Yinka Bode-Are, was attacked by some workers of the filling station while trying to take shots of the incident.

They manhandled her for daring to take photographs of the incident.

All explanations made by Bode-Are that she was on official assignment to cover the incident fell on their deaf ears as they seized her camera.

They held her hostage for some minutes, insisting that they would not let her leave unless she deleted all the shots taken from the scene.

The workers, all men, dragged her before the owner of the station who ordered his boys to delete all the shots taken by Bode-Are before allowing her to leave the scene.