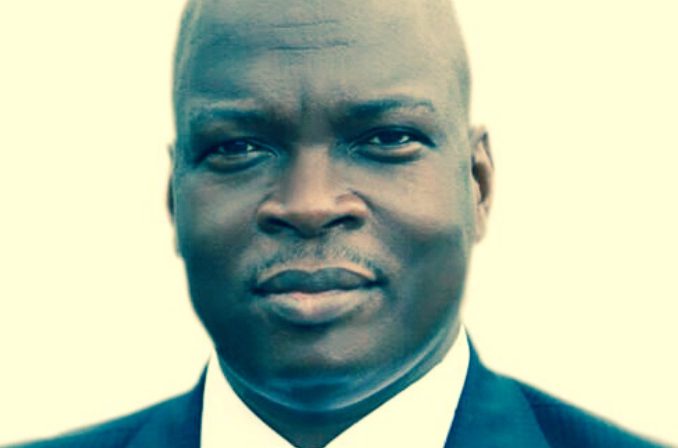 Hakeem Bello, the Special Adviser on Media to the Minister of Works and Housing, Babatunde Raji Fashola, has had his house in Magodo Phase 11, Lagos State marked for possession on the purported orders of a Supreme Court judgement obtained by the Adeyiga Family against Lagos State.

So far, the judgment has not been shown or cited despite the fact that the marking has been on for about two weeks.

In a video shared online, a man wearing a wine coloured shirt on a black trousers was seen marking the wall of Bello’s house with what looks like a spray paint.

Meanwhile, some residents on Tuesday morning staged a protest over the continuous presence of armed policemen in the estate following the invasion last month and the planned demolition of properties.

In December 2021, the Adeyigas backed by a group of armed police officers stormed the estate, stating that they had a court injunction to reclaim the land on which some of the houses were built.

The Lagos State Government described the invasion as unwarranted and vowed to prosecute all those involved.

However, since the invasion in December, the police officers have not left the estate.

The protesting residents say it is unacceptable for the armed police officers to continue to lay siege in their environment.

Speaking during the protest, the Chairman of Magodo Residents’ Association, Bajo Osinubi, said: “We called our people out to protest this morning over 50 policemen living within the estate.

“We want the police out of our estate.

“There are no cases of kidnapping, rioting, but why are they still here?

“We want them out of our estate.

“We want to live in peace.

“This is a business between the Lagos State Government and the Adeyiga family.

“We are under siege; the police have been here for two weeks, they came in December to take possession of properties on behalf of Adeyiga family and others.

“Since then, we’ve gotten in touch with prominent personalities to intervene and get the police off our estate.

“We are victims, even inside our own homes.

“The police have been here.

“They are very restless.

“Just imagine there is an altercation between a resident and the police.

“The easiest way to avoid any such scenario is to detach the police officers back to Abuja.

“We’ve allowed people to go out, but we are protesting this morning to let the world know what’s going.

“We are supposed to be at work, but we want the whole world to know what’s happening at Magodo.

“The governor (Babajide Sanwo-Olu) spoke with me yesterday (Monday) and he said he’s on top of it.

“He has promised to address the situation.

“The Commissioner of Police last week sent the DCP Ops to supervise the withdrawal of troops but they claimed they are yet to get signal.

“We learned the police were drafted from Abuja.

“Our immediate concern is to get the police out of the estate for us to leave in peace.

“We need the government to do the needful to get the family off our neck.

“About four to five years ago, they did it, and now again this year, they want to do it.”

They called on the Lagos State Government to intervene into the matter.