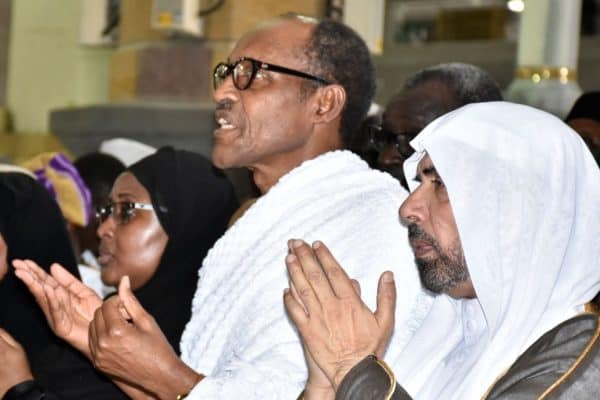 President Muhammadu Buhari as part of the rites of the lesser hajj he is observing had to burst into a race along with other pilgrims in Saudi Arabia.
Buhari on Thursday left Nigeria through the Nnamdi Azikiwe International Airport at about 11am for Saudi Arabia to observe Umrah (lesser hajj).
The rites began on Friday after the President arrived in Saudi Arabia on Thursday evening along with his wife, Hajia Aisha Buhari, some family members and aides.
The video, shot by the Nigeria Television Authority, has been shared by many Twitter users.
It showed the President and his entourage break into running while performing one of the rites of the Hajj at the Masjid Haram (the Grand Mosque) in Makkah.
The video has ignited several comments.
Adumah @adumahsonu tweeted: “Just saw a clip of Buhari running in SA. Funny and strange at the same time. Doesn’t fit the frail and sickly image the media has painted of him.”
Mathew @ATM Rege tweeted: “I saw President Buhari at some point running… The same man the opposition said he’s not fit or are my eyes deceiving me?”
Son of David @DrOlusesan also tweeted: “If u were ever part of it @MBuhari was swapped, that wasnt banter. T’was a great sin against God and d nation. Go on your knees and beg God for forgiveness. I have this hunch he will live longer than many of those who wished him dead. Una know una self. Na dem dem.”