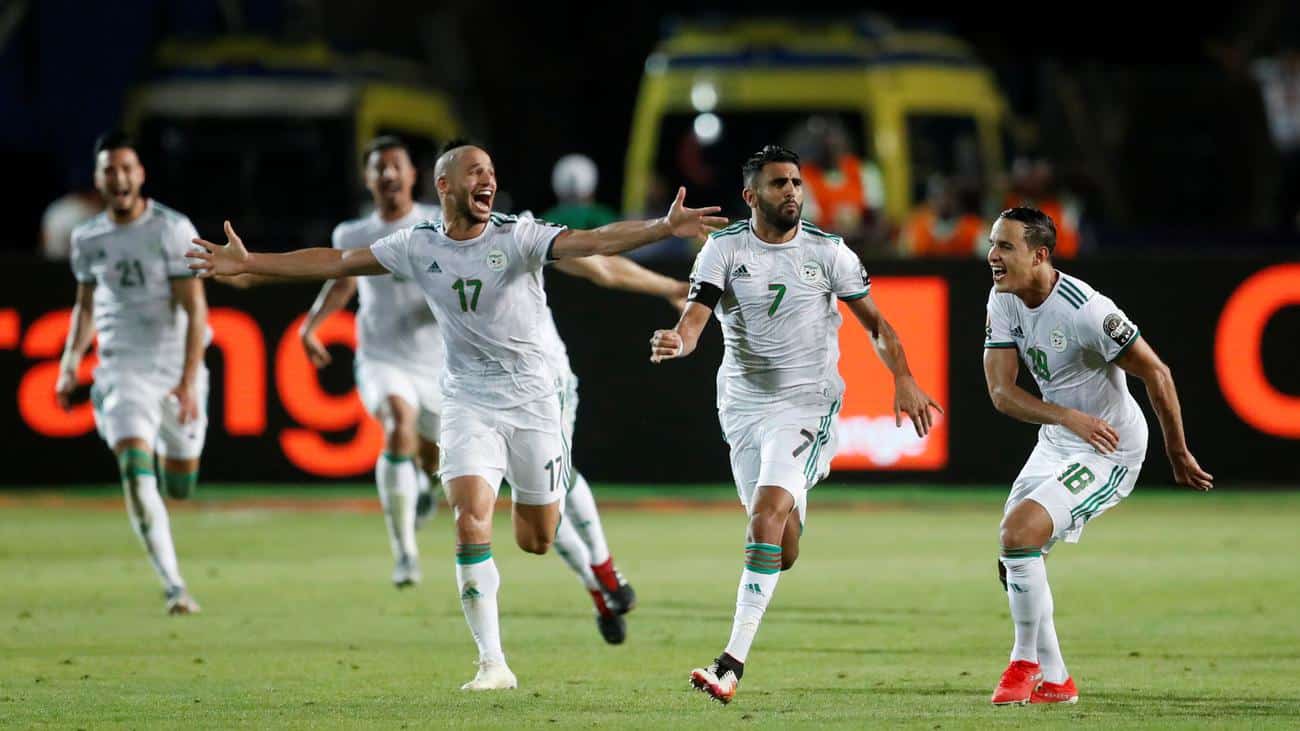 Algeria have won the Africa Cup of Nations after beating Senegal 1-0 in the final in Cairo.
Baghdad Bounedjah’s strike after just 79 seconds – the quickest final goal in the history of the competition – sealed victory for the Desert Foxes.
Senegal had a penalty overturned by VAR, which only added to the cagey atmosphere and sweltering conditions in Cairo.
But a solid defensive display from Algeria allowed them to hold on their narrow lead and clinch a first AFCON title in 29 years.
Unlike in many other finals, the two sides went into the game having already met in the group stages, with Algeria emerging victorious with a 1-0 victory.
With that being the opening game of the group, it didn’t feel like much of a psychological edge.
Instead, Algeria would find a huge slice of good fortune after just 79 seconds.
Ismael Bennacer won possession down the left flank and sent Bounedjah advancing towards goal.
The striker still had a lot to do but he found space 20 yards out and decided to go for goal.
Despite the best efforts from Salif Sane to block the shot, it took a wicked deflection and looped over Senegal goalkeeper Alfred Gomis into the net.
The goal sparked wild celebrations on the Algeria bench as they whole team raced to the sidelines.
Had they celebrated too much, too soon?
Senegal began to find their feet in the game as Mbaye Niang went close with a fierce drive from 20 yards out which cleared the crossbar by a matter of inches.
Sadio Mane was fortunate not to see red after appearing to throw an elbow into the torso of Sofiane Feghouli before a corner was about to be taken.
The referee, perhaps unsighted, allowed play to continue with no intervention from VAR.
After the break, Senegal looked hungry for the equaliser and nearly got their wish.
Ismaila Sarr broke down the right and drilled in a cross which struck Adelen Guediora’s arm and the referee pointed to the spot.
But after a long delay, Cameroonian official Alioum Alioum consulted the TV screen and overturned the decision with help from VAR.
Given that Guediora’s arm was by his side, it looked like the right decision.
Senegal continued to push forward, with Niang missing a golden chance after rounding the goalkeeper only to fire into the side netting.
But Algeria held firm despite being pinned to the edge of their area as they always seem to do to clinch a famous victory in Cairo.