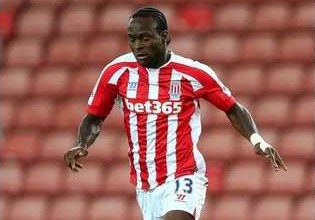 Stoke City winger, Victor Moses, has hit out at referee Craig Pawson for not awarding him a penalty in their 1-0 win over Newcastle United.
Pawson angered thousands of Stoke fans inside the Britannia Stadium by waving away penalty appeals after Moses went down under a challenge from Yoan Gouffran on 21 minutes.
Nevertheless, the Chelsea loanee, who grabbed an assist for Peter Crouch’s header prior to the incident, shelved his personal grievances and acknowledged the importance of the win.
“We’re delighted with the three points. It was a crucial game and we’re pleased,” he stated.
“I was surprised not to be given a penalty. I was going to take the ball past him. He hit my leg and I went down but the referee didn’t give it.
“This was a major game for us and getting the three points we can kick-start the season.”
Stoke City’s striker, Peter Crouch, has also heaped praises on the Nigerian after the duo played starring roles in 1-0 win over Newcastle United.
It was the 23-year-old’s third assist for Stoke following a season-long loan move from Chelsea, and his teammate is delighted with his contribution thus far.
“Victor Moses has been our main threat for the whole season,” Crouch observed.
“I know he’ll get quality balls into the box and will be at his man nine times out of 10 and it was great delivery. The quality of the ball is always good and Victor has brought pace and directness.”
Victory over the Magpies carried Stoke up to 11th in the Premier League table.