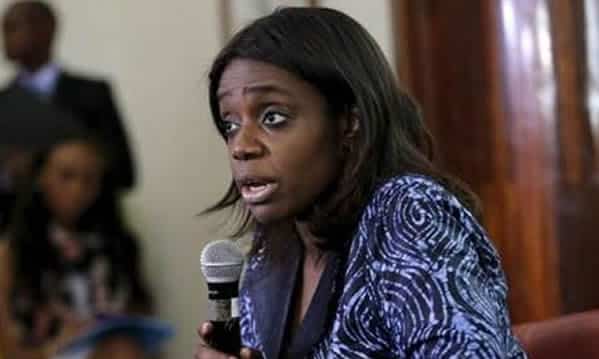 The Minister of Finance, Kemi Adeosun, on Thursday advised wealthy Nigerians to take advantage of the Voluntary Assets and Income Declaration Scheme to regularize their tax status and escape unsavoury consequences.
The minister stated this in Enugu during the hosting of VAIDS by the Enugu State Government.
In attendance at the event were Governor Ifeanyi Ugwuanyi, members of the State Executive Council, legislators and traditional rulers.
Tunde Fowler, the Chairman of the Federal Inland Revenue Service, was represented by Sir Oseni Elamah, the Executive Secretary, Joint Tax Board.
Also present were representatives of the business community in the state.
They included the Enugu Chamber of Commerce, Industry and Agriculture; Nsukka Chamber of Commerce, Industry, Mines and Agriculture; bank executives; lawyers; market traders; electronic dealers; hospital owners; school owners; and transport owners associations.
In her speech at the event, Adeosun said the Federal Government has compiled data on property, bank accounts, shareholdings and other income sources of individuals and corporate entities.
According to her, VAIDS was conceived to allow Nigerian companies and individuals to do what right for the country, right for Enugu State and right for one another.
She said: “From our records, there seems to be a few big men and big women from this part of the country, who may need to think very carefully about making a VAIDS declaration.
“We have been compiling data on property, bank accounts, share holdings and other sources that suggest that many people have not been paying the right taxes.
“VAIDS is an opportunity to regularize.”
The minister added that huge sums of money have been moved out of Nigeria without the owners paying a kobo in tax.
Adeosun warned those who have moved money out of the country without paying taxes would be found out.
She said: “The good news for government, which is bad news for the tax evaders, is that globally, nations have agreed to share data under the Automatic Exchange of Information.
“This means that sitting at our desks in Abuja, we are getting information about assets that the owners thought were well hidden from the tax authorities.
“As you know, Nigerians are entitled to keep their wealth anywhere in the world, including under their mattress, but what the law requires is that they pay tax on their income as they earn it.”
Adeosun declared that Nigeria is proud of her millionaires, billionaires and even trillionaires and want many more emerge.
She, however, stated that the government wants everyone to pay the right taxes for the development of the country.
Nigeria, she added, has a very poor scorecard in tax payment.
She said: “When oil came, we abandoned the old systems of tax collection that provided most of our infrastructure since colonial days.
“Currently, we have just 14 million taxpayers out of 70 million who are economically active.
“So many who should be paying are not paying anything.
“Incidentally, we have 74 million registered voters.
“Also, some who are paying something are not paying the correct amount.
“It may seem smart for a businessman to go and get a tax clearance certificate for N20,000 when he earns millions, but I can tell you without fear of contradiction that not only is this illegal, but such people are cheating themselves and future generations.”
The scheme, which provides a time-limited opportunity for tax defaulters to declare their indebtedness, ends on March 31, 2018.
Declarers will be free of tax audits, payment of interests and penalties on owed taxes as well as prosecution.
Failure to declare at the expiration of the window will attract severe penalties and prosecution.