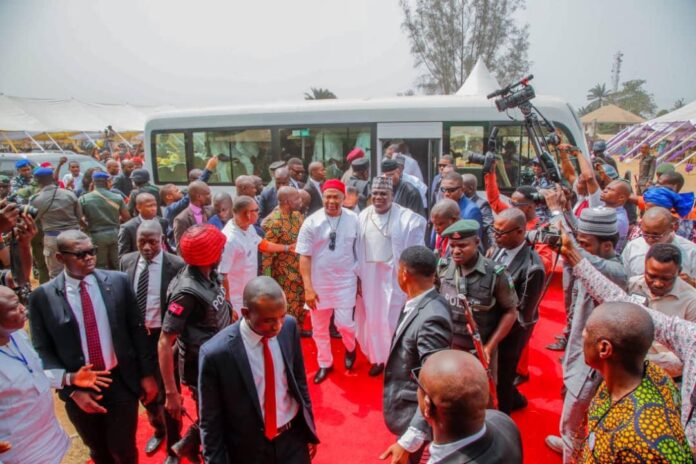 The President of the Senate, Ahmad Lawan, on Friday said the late Senator Benjamin Uwajumogu until his death was a detribalised Nigerian who believed strongly in unity among majority and minority ethnic groups in Nigeria.
Lawan, while describing the lawmaker, who represented Imo North Senatorial District, in his lifetime as a nationalist figure, said Nigeria will miss Uwajumogu for his contributions to good governance.
The Senate President stated this in his remarks at the burial ceremony of the deceased lawmaker, which held at Ihitte Uboma Local Government Area of Imo State.
He said: “Senator Uwajumogu believed in this zone, Imo North, which he represented. He worked meritoriously for this zone, committed to one Nigeria.
“He was of the thought that parliamentarians must remain focused, protect and foster the interest of the people they represent.
“We in the National Assembly, particularly in the Senate will continue with these ideals, that our late colleague, Senator Benjamin Uwajumogu, lived and died for.
“We will always ensure that the interest of Nigerians, their dignity are protected, this is what we are supposed to do as representatives of the people of Nigeria, and we will continue to do that.
“When our late brother joined us, he was appointed by our selection committee to be Chairman, committee on Employment, Labour and Productivity.
“At every turn of event that we have anything to do with his committee, and especially the Ministry of Employment, Labour and Productivity, Senator Benjamin Uwajumogu would be there and active.
“So, he was an active parliamentarian both within and outside the chamber. He was a decent representative of the people of Imo North.
“I want to again console with the family of Uwajumogu, your husband, your father, your brother lived for his people and died ensuring that he performed his obligations to his people.
“For us in the Senate and indeed the National Assembly, we will continue from where he stopped. Those ideals will not die, those ideals we will uphold.
“We will ensure that Imo North will not lack anything between now and when there will be a replacement.
“I want to also extend my condolences to the people and government of Imo State, your Excellency, I want to assure you that we are going to work will all the states of the federation, and Imo state is one of them.
“Having being in the National Assembly, I’m sure that you will take advantage of those things that will enable our states perform.”