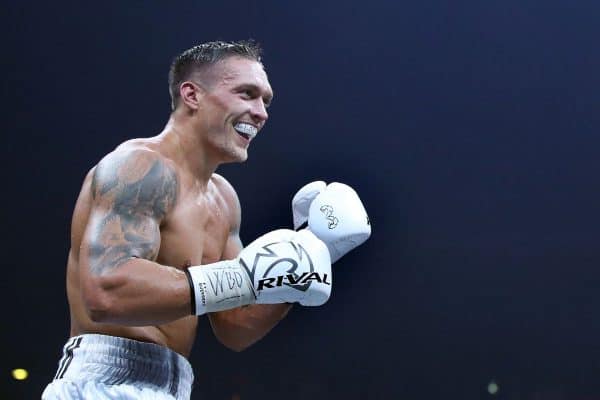 Oleksandr Usyk is plotting a fight with Tyson Fury after facing Anthony Joshua again, his promoter has revealed.

Fury’s brilliant win over Deontay Wilder in their trilogy fight extended his WBC championship reign, a fortnight after Usyk won the IBF, WBA and WBO belts from Anthony Joshua.

The new undisputed heavyweight title collision would be between undefeated duo Fury and Usyk.

“It will be after Usyk defeats AJ in the rematch,” his promoter Alexander Krassyuk told Sky Sports.

Joshua has triggered a rematch clause and is set to fight Usyk again in early-2022.

“I’ve watched the fight, analysed my preparations and identified my mistakes,” Joshua has said. “I’ve learned my lesson.”

Usyk already has one eye on a fight with Fury which would unequivocally decide the heavyweight division’s No 1.

Asked if Usyk was impressed by Fury’s dismantling of Wilder, his promoter Krassyuk said: “He was. And he was impressed with how the boxers fought without showing boxing skills. They were trying to [badly hurt] each other.”

Fury has also been targeted by Dillian Whyte, who will establish himself as the WBC mandatory challenger if he overcomes Otto Wallin on October 30.

Whyte told Sky Sports about chasing a first world title fight: “Hopefully now the WBC forces my position and Fury has no choice.

“It’s a massive British fight, a major fight for Britain.

“Fury is an unpredictable man who might say: ‘I am done!’

“I hope we can make a fight when I get past Wallin.

“But Fury is a difficult guy to plan.

“I haven’t heard a word from him about making a fight.”

Sky Sports’ Carl Froch had wondered if Fury might opt to hang up his gloves after concluding his epic trilogy with Wilder.

“There is nothing left for him to do,” Froch said.