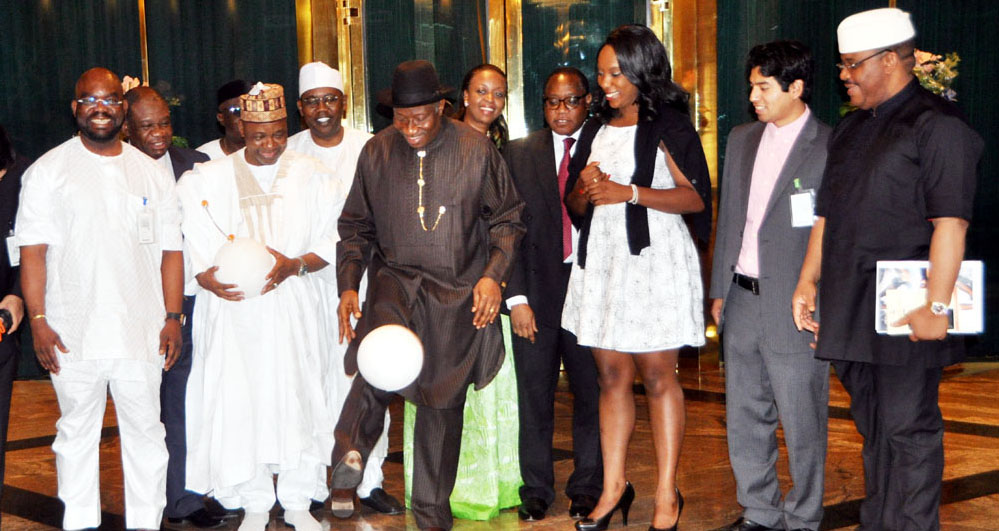 A Nigerian based in the United States, Jessica Mathews, on Friday presented a football and skipping rope she invented that are capable of generating electricity to President Goodluck Jonathan at the State House, Abuja.
President Jonathan congratulated Jessica on her creativity and innovativeness, expressing optimism that it would inspire young Nigerians to think more about what they can do to benefit the society.
The President, therefore, appointed her a ‘Soccer Ambassador’.
Mathews, 25, from Edo State, was accompanied to see the President by her father and the Ministers of Trade and Investment and Works, Dr. Olusegun Aganga and Mike Onolememen, respectively.
According to her, after 30 minutes of play, the ball is capable of generating three hours of electricity and six hours if played for one hour.
It could store power for 72 hours with a lifespan of one and half year before it will be due for replacement.
She also told State House correspondents that the electricity generated could be used to charge mobile phones and other household equipments as well as serve bulb points.
The co-founder of Uncharted Play studied Psychology and Economics at Harvard University in the United States of America but took interest in teaching herself electrical and mechanical engineering.
Jessica spoke further: “I am a Nigerian and was in Nigeria.
“It was my aunt’s wedding and we lost power.
“How many times?
“Is there anyone who has not been affected?
“For me, I was raised to seek a solution when there is a problem.
“To be as creative as you can and be open to different ways so you can address the situation.”
So why did Mathews opt for football?
She said: “To me, we all know that football is the most popular thing in the world.
“To most people, football form is the most convenient.
“Any man on the street will be attracted to kicking football.
“So, the idea is to put something that people really love and get more out of it.
“These are the things we can use to see if we can amplify existing behaviour to bridge the gap between what is working and what is not working in this country that we love so much.
“We take our passion for sports that is so beautiful and we say okay, let’s give people renewable clean power that they can control.”
Speaking about the invention, Aganga said government would explore the possibility of mass producing the football, which has already been accepted and is in use in the US.
The Minister said the feat achieved should inspire other Nigerian youths.
He spoke further: “The product is actually versatile.
“It is not just about the electricity you see.
“You can use it to charge your mobile phones, for fans.
“So there are so many things for which it can be used.
“We are also looking at the possibilities of manufacturing it in Nigeria and see how we can make it cheaper in this country.
“I am glad that Jessica has also agreed to be our Ambassador in terms of promoting entrepreneurship in our universities.
“What we want to do is to bring successful entrepreneurs like Jessica to inspire the students and make them more creative so that they can also be employers of labour.”