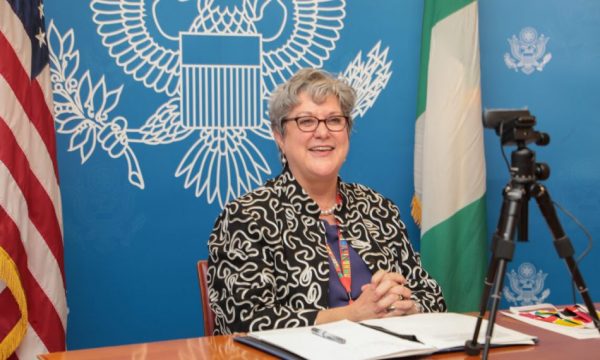 US Ambassador Mary Beth Leonard and a delegation from the US Mission met government leaders, private sector and civil society representatives in Sokoto and Kebbi States to discuss bilateral relations between the United States and Nigeria.

The teams also exchanged views on key issues such as security, health, education, economic development and the COVID-19 response, and to review US assistance activities in the two states.

With Governor Aminu Waziri Tambuwal, Ambassador Leonard acknowledged the difficulties faced by Sokoto regarding regional insecurity and encouraged a focus on improving economic opportunity that will help improve citizens’ lives.

“Insecurity is a difficult problem, but I don’t think it’s an insurmountable one,” Ambassador Leonard told local press later. “We encourage all citizens to contribute positively to prosperity and security of this country.”

The Ambassador visited Bishop Matthew Kukah, head of the Roman Catholic Diocese of Sokoto, where she discussed interfaith efforts in the state, and discussed ways to build community and encourage youth civic engagement.

During her stay, the Ambassador met several US Government exchange alumni and highlighted the impact they are making in Sokoto.

In a press briefing at the American Corner in Sokoto, the Ambassador noted the United States provided $122 million to build capacity and support health care in Sokoto since 2015.

She also met with partners from the USAID-supported Nana Khadijat Sexual Assault Referral Center to better understand the needs of survivors of gender-based violence, especially during the COVID-19 era.

The SARC delivers free medical, legal, and psychosocial services to survivors of violence.

In Kebbi, the Ambassador discussed agriculture with Governor Abubakar Atiku Bagudu, who acknowledged the valuable support from the US Feed the Future initiative, which has helped improve access to agricultural support services for women farmers.

In Argungu, Governor Bagudu joined the Ambassador to launch a new partnership with WACOT Rice, a leading Nigerian producer, at the firm’s rice processing factory.

A $1.48 million grant through the USAID-funded West Africa Trade and Investment Hub leveraged an $8.6 million WACOT investment to bring 5,000 additional farmers – half of them women – into its Outgrower Expansion Project, which will modernize production enough to double rice yields and support economic growth in Kebbi and promote economic development.

Outgrowers are farmers under contract to supply a specific processing firm.

She lauded the state’s commitment to early grade reading by meeting its financial commitment to NEI Plus, and in so doing the example Sokoto has set for other states to follow suit.

“It was wonderful to get a close-up look at U.S. government programs in action and see their impact firsthand,” the Ambassador said at the end of the trip.  “I hope to visit again soon.”