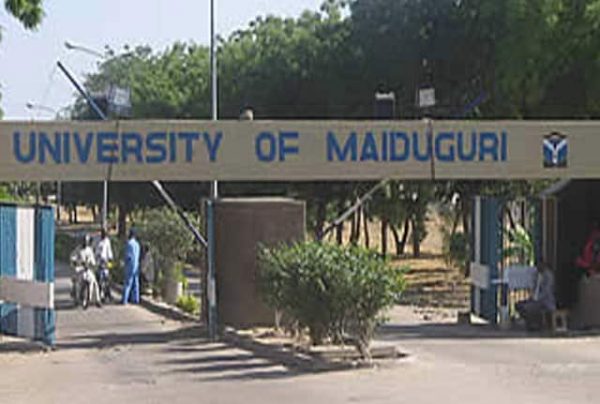 The University of Maiduguri Alumni Association has boasted that its members took up a record number of seven gubernatorial seats nationwide on May 29, 2019.
The boast was contained in a statement on Wednesday by the President of the Alumni Association, Adamawa State chapter, Abubakar Abba Tahir.
Tahir listed the governors produced by the institution on May 29, 2019 as Dr. Okezie Ikpeazu of Abia State, Alhaji Abubakar Sani Bello of Niger State, Senator Bala Mohammed of Bauchi State, Prof. Umara Zullum of Borno State, and Rt. Hon. Ahmadu Umaru Fintiri of Adamawa State.
He said Dr. Hadiza Balarabe took the oath of office as the Deputy Governor of Kaduna State and Hon. Usman Khadafu as the Deputy Governor of Borno State.
Tahir said this was unprecedented, adding: “UNIMAID has achieved an uncommon record.
“This demonstrates the cohort of talented people being produced by the institution in all fields over the years.”
The President said UNIMAID had earned the reputation of being “a convergence and confluence center stage for a broad variety of critically needed competencies, including governance skills.”
Tahir also observed that the performance of UNIMAID alums in this political dispensation has justified the institution’s trademark slogan that says: “If you want to be made, come to UNIMAID. If you are already made or are half done, UNIMAID can make you better.”
He implored UNIMAID graduates to continue to demonstrate the highest standards of service to community and country in their areas of expertise.
UNIMAID, a second-generation university, was founded in 1975.
Over the years, it has outpaced its peers in teaching, research, community service and alumni accomplishments among others.
Tahir appealed to all the five governors, two deputy governors and all other well-placed alumni to reconnect and launch an alumni fund to support the institution’s capital campaign.
He said this would ensure sustainability and future prosperity of UNIMAID.
He added: “The best set of leaders and stake owners for any university are its own graduates.
“Therefore, UNIMAID alumni should never stand aloof of their great citadel of learning, from where they were made into what they have grown to become today, ever busy impacting lives in a broad range of ways.”