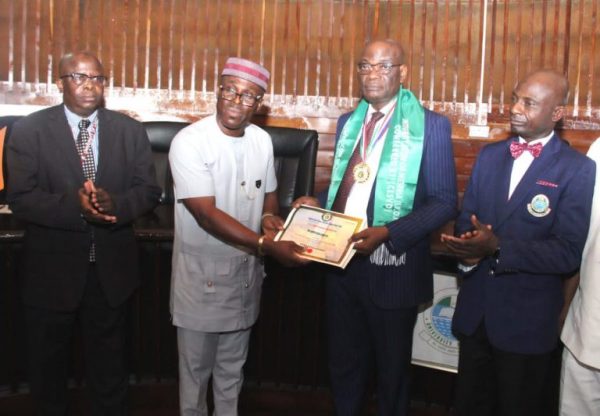 The Centre for Ethics and Self Value Orientation, an NGO, on Monday presented an award of Integrity Icon of Nigeria to the Vice-Chancellor of University of Lagos, Prof. Oluwatoyin Ogundipe.

It made the presentation to the vice-chancellor in Lagos through the Executive Director of the NGO, Prince Musa Yakubu.

It stated that the title was exclusively reserved for public officials not found wanting on corruption.

Yakubu noted that Ogundipe had demonstrated character, which distinguished him among peers.

Yakubu added that the title conferred on the vice-chancellor was the NGO’s highest, with the likes of Chief Emeka Anyaoku, a one-time Commonwealth Secretary-General and a few others among the beneficiaries.

He was also issued an Ethical Leadership and Conduct Certificate.

According to Yakubu, the NGO’s whistle blowers had embarked on a 16 months secret investigation of 80 Federal Government-owned tertiary institutions across the country to carry out extensive independent finding on their projects.

He noted that the organisation focuses on exposing corruption, promoting ethical leadership, providing ethical education and engaging in self-orientation of citizens.

According to the Executive Director, one of its core mandates is also to hold leaders accountable to citizens and in doing this, they set out to work without interference.

He said: “In doing all these, we set parameters.

“In these federal institutions, for instance, we went undercover for a period of 16 months based on our ethical standards.

“We seek to know if funds set aside for certain purposes are indeed used for the things they are meant for, find out which contracts are awarded and to who, roads for construction if they have been done and others.

“We also look out for the leadership style of the public officers there, if it is transparent and devoid of sentiments and if the management style is participatory in nature among other qualities.

“These are the kind of things we have done in these institutions for the past 16 months.

“And it is on this basis that we find UNILAG to have cumulatively scored 79 per cent in the category A, which is basically for federal universities.

“Therefore, corporately too, we have equally issued certificate of credence to the university as an entity, which enlisting it, is among the top 10 least corrupt federal universities in the country.”

Yakubu also awarded eight members of the management team of the university individually with the Professional Ethic Compliance titles.

The Executive Director noted that based on what they had seen in the university, the NGO would be carrying out a three-day training of 100 members of staff of the university for two days and 100 students for a day, as a way of giving back.

He said students would be trained on expected leadership and conduct ethic in the work place.

Responding, the vice-chancellor returned all glory to God, noting that the award meant more work.

Ogundipe said: “I want to return all glory to God and I also want to say that this award means more work, as well as shows that people are watching.

“It also goes to show that people must also be careful in whatever they do.

“I want to assure you that we will continue to discharge our duties in line with best practices to ensure that the university is taken to its deserved height.

“At the end of the day, I want to see myself as someone who emptied himself, trying to lift the standard of this university.”

Ogundipe said he was optimistic that the staff and students would impact their immediate communities as well as contribute their quota to the development of the university after the training.