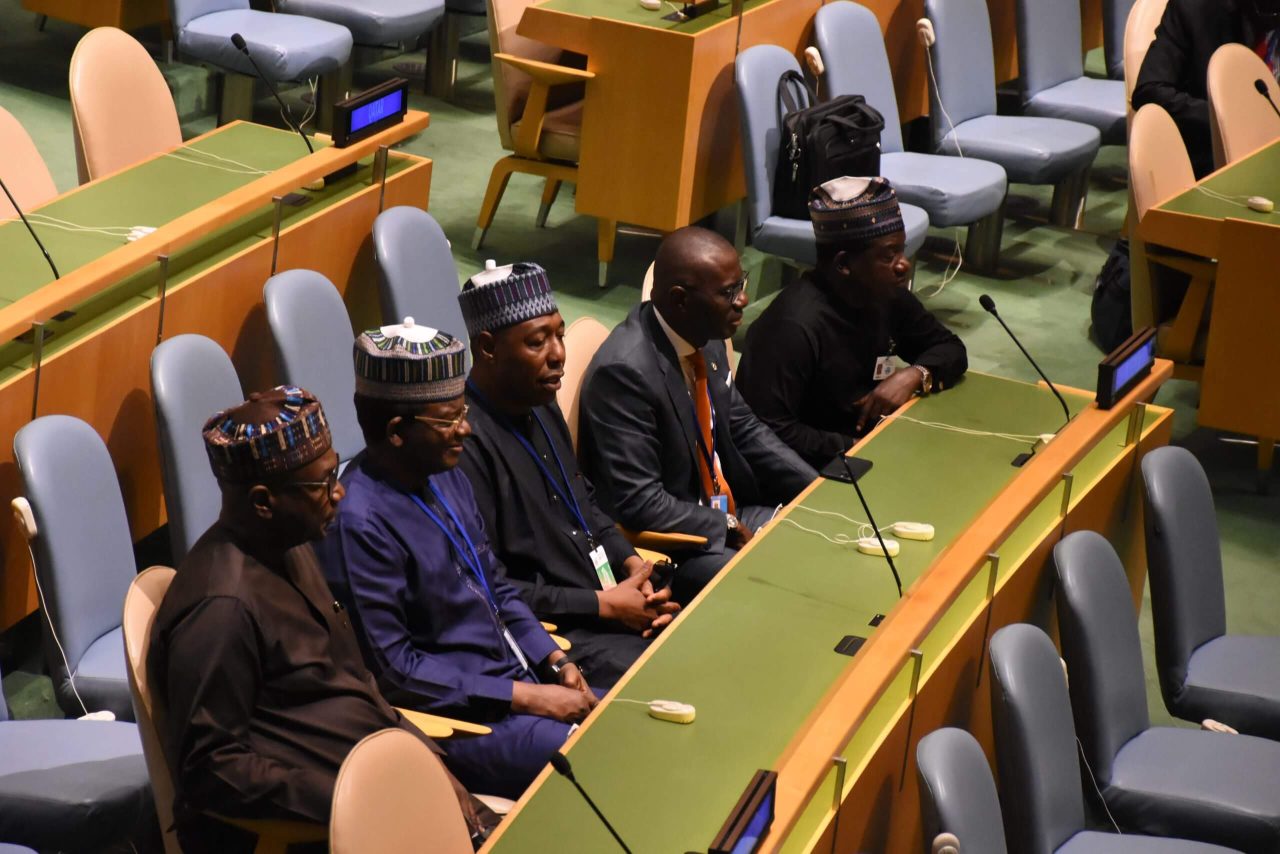 Some governors who are part of the Nigerian delegation at the ongoing 77th session of the United Nations General Assembly have reaffirmed the commitment of President Muhammadu Buhari to uphold rule of law.

The governors had accompanied President Buhari to deliver his statement to the UN General Assembly on Thursday.

Also, Buhari was accompanied by the Minister of Foreign Affairs, Geoffrey Onyeama; Permanent Representative of Nigeria to the UN, Prof. Tijjani Muhammad-Bande; and some top political leaders to deliver his address.

The governors reaffirmed Buhari’s commitment to constitutional term limits and Nigeria’s efforts to promote rule of law and democracy in West Africa.

The governors cited the country’s support for The Gambia, Guinea Bissau and Chad during their political impasses as an affirmation of his commitment to ensuring stability in the West African subregion.

Reacting to Buhari’s statement, Lalong told newsmen at the UN headquarters in New York that the President would not fail in his pledge of delivering fair and fair elections.

He said: “My take on that is knowing Mr. President.

“As you can see from the text of the message, he said he is not the type that will come and change the rule halfway to ensure that he will continue in office.”

Lalong said he had worked with the President for so long and that he would keep to his promise.

He said: “I know that what he said is really coming out from his heart that there will be free and fair election.

“And there will also be new leadership.

“And he will also leave after his eight years.”

AbdulRazaq said the President spoke about the fact that he would be leaving the office and that he has entrenched democracy, and how this will be his last visit to the address the global community.

He said: “The address was such that he dealt on the issues affecting the world, post COVID, global food security, issues in Eastern Europe, Democracy in Africa, truncation of democracies in Africa, and how we’re consolidating in Nigeria.”

According to him, he is leaving the stage and he intends to conduct a free and fair election in Nigeria for posterity.

AbdulRazaq added: “Well, we all know the President, he is very straightforward in his dealings with others.

“In the last meeting with the governors of the All Progressives Congress when the APC had its presidential candidate primaries, he told us clearly that it’s going to be a fair election and he expects INEC to do a good job.

“So, meaning that there’ll be no manipulation and he asked us to go and work hard towards the elections, make sure we secure our states and deliver APC at all levels.”

On the impact this will have on the election, AbdulRazaq said: “Well, like he the next Nigerian president to that would address the assembly will not him.

“So, it shows you that he spoke basically about elongation of tenure in several countries and that that will not happen in Nigeria.

“That democracy has come to stay.

“So we’re looking forward to sustaining his legacy.”

On his part, Sanwolu said: “The points that I’ve taken away from there is how despite COVID and all the things have happened to us last year, that we stood out in the community of nations.

“And how Nigeria even helped countries suffering around Africa, you know, in West African regions, that have suffered disruptions and military coups and the rest of it and how toes up  to mitigate and to help stabilise countries in Africa.

“He did took very strong lines to end his speech, which I believe that indeed he has earned his pay as Nigeria’s President at the General Assembly.”

On his reaffirming his commitment to the general elections, the Lagos State Governor said: “For someone to tell everyone that by this time next year, he is certain that there will be another president.

“He said there would be another president that would be presenting Nigeria’s statement at the 78th General Assembly.

“This fact goes to show that he wants to conduct a free and fair election come next year.”

Similarly, Zulum reiterated the governors view that Buhari would conduct credible elections in Nigeria under its leadership.

He said: “He also said that ‘inshallah’ by next year, a new president will be elected and will be here to address the General Assembly.

“So, this is an indication that the President is willing to ensure stable democracy in Nigeria.”

Matawalle said the President in his statement talked about the issue of credible elections next year.

Matawalle said those that are saying the president or the government is not serious or they have no confidence in the electoral process, has said it here in United States.

“So, that can give more confidence to the people that Mr. President is going to conduct a credible election in Nigeria,” he said.