Unease in Senate as plot to remove Saraki, Ekweremadu thickens 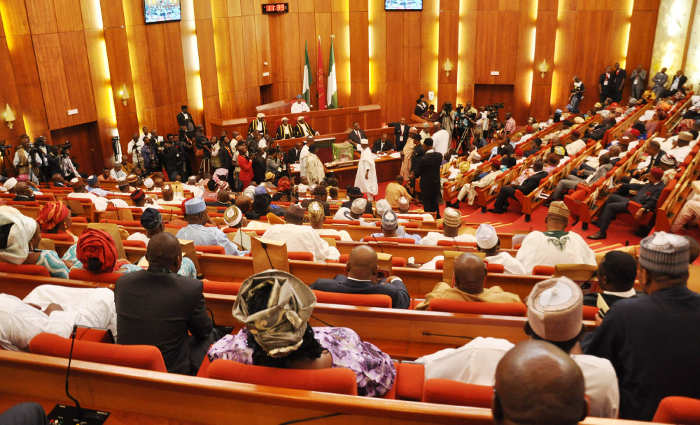 The Senate has concluded plans to investigate Senator Abdullahi Adamu’s involvement in the destabilization of the Senate.
Senator Isah Hamman Misau had in January said at plenary that a Minister is leading a move to impeach the President of the Senate, Dr. Abubakar Bukola Saraki.
Coming under point of order on Thursday, Senator Obinna Ogba told the lawmakers that there are ongoing plans by some senators to remove the leadership of the Senate, adding that money has already been shared among the senators involved to ensure the destabilization of Senate leadership.
Ogba, who alleged that Adamu was the arrow head of the group, claimed to have evidences of telephone conversations of those involved in the plot against the leadership of the Senate.
He said: “There is a plan by some people in this Senate, may be under the leadership of my distinguished colleague, particularly Senator Abdullahi Adamu.
“Mr. President, you remember in January, distinguished Senator Misau made a comment here that there was a plan to remove the Senate President and in fact the leadership.
“Now, I have reliable information that some people are already planning to destabilise the Senate, including the Senate leadership, by organising demonstration, of which money is already exchanging hands.
“I believe that all of us are all leaders in this country and everybody who sees something that will destabilise the country or the Senate or even the democracy should avoid it.
“As we are here, if there is anything going on, you have the opportunity to raise not to go outside the chambers to start planning civil resistance, market women to come for demonstration against the leadership of the Senate.
“Mr. President, I want this senate to investigated this matter properly.
“I have evidence to show what I’m saying.
“There is a telephone conversation going on which any other person can also print it out, between Senator Abdullahi Adamu and some other people.
“When Senator Misau raised it in January, we didn’t take it as anything.
“I am saying this: we must stand up to look into this.”
In his remarks, the Deputy Senate President, Senator Ike Ekweremadu, who is also said to be affected by the move, referred the matter to Senate committee on Ethics, Privileges and Public Petitions.
Ekweremadu appealed that anyone planning to destabilize the country is not doing it any good.
He said: “The difference between military, autocratic regime and any other oppressive regime is the parliament.
“Once we remove the parliament, there is going to be problem.
“In whatever we do, we must continue to preserve the sanctity of the parliament.
“I want to appeal again that anyone planning to destabilise this country is not doing us any good.”
It could be recalled that Adamu was removed as the chairman of the Northern Senators Forum over allegations of mismanagement of funds belonging to the forum.
The letter removing Adamu was signed by the Publicity Director of forum, Senator Dino Melaye.