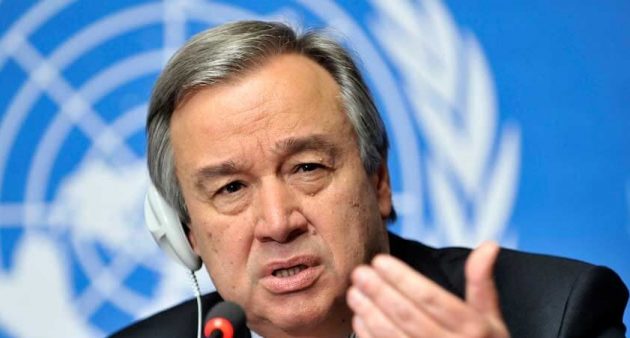 UN Secretary-General, Antonio Guterres, has called for those responsible for Sunday’s killings in Malari village, Borno, to be brought to “swift justice”.
Guterres, in a statement by his Spokesman, Stephane Dujarric, condemned the killing of dozens of people in violence in Borno by suspected Boko Haram terrorists.
The Secretary-General said he remained “deeply concerned about the persisting violence in the Lake Chad Basin region”.
The UN chief “expresses his deepest condolences to the bereaved families and to the Government and people of Nigeria and wishes a speedy recovery to the injured”.
He commended national and regional initiatives to bring peace and stability to the area and to address the root causes of the conflict.
He also reiterated his calls on the international community to increase support to regional efforts in the fight against Boko Haram in the Lake Chad Basin.
Boko Haram terrorists reportedly killed more than a dozen people in an attack on Malari village in the early hours of Sunday.