Umahi to Igbo socio-cultural groups: Unite for welfare of our people 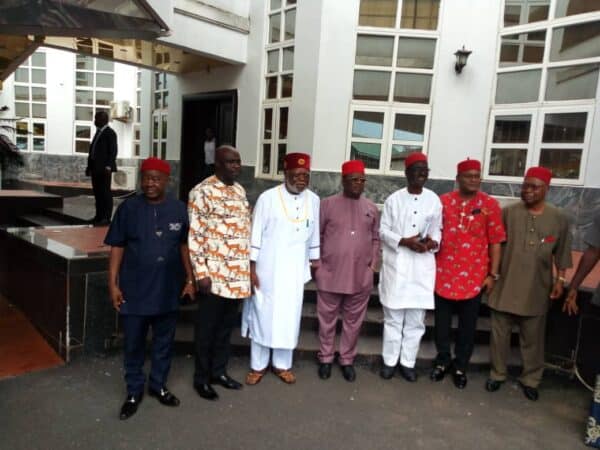 All Igbo socio-cultural groups have been called upon to eschew unnecessary competitions and unite formidably to advance the unity and welfare of the Igbo nation.
The Chairman, South East Governors Forum and Governor of Ebonyi State, Engr. David Umahi, made the call on Friday at the Government House, Abakaliki when he received in audience a group, Igbo Leaders of Thought, led by Prof. Ben Nwabueze.
Umahi, who extolled the personalities of the members of the group, urged them to work in harmony with the apex Igbo socio-cultural group, Ohanaeze Ndi Igbo, and others to create a common front for promoting Igbo identity and survival.
He noted that bickering, confrontations and castigation of leaders only constitute a clog in the wheel of progress of the people, while depriving the zone of its rightful place in the general affairs of the Country.
While commending the group for its selfless and non-partisan stance, Umahi challenged it to employ its intellectual character to formulate a roadmap towards encouraging Igbo entrepreneurs to invest homewards for the interest of the people.
He however, noted that differences were inevitable in any human relationship but advocated the application of wisdom and love in handling disagreements at all quarters.
Umahi said: “I said to Mr. President that Ohanaeze cannot outlaw other Igboland organisations.
“It’s not possible.
“We cannot compete with one another, but Ohaneze must get involved.
“I feel that what they cannot see immediately, you will see; what you can’t see, the Ikenga can see, and what you can’t see, Nzuko Umunna may see.
“But the most important thing is that we have a single objective, which is to help our people.
“This idea of confrontation, I no ‘dey’ for it.
“If you are a very good leader, it is for a limited time, and if you are a bad leader, it’s also for a limited time
“Leaders are made by God and God alone.
“Any group I’m going to host that will castigate any governor or Mr. President, I will switch off the microphone.
“I’m not saying it and hiding.
“I tell my people if you castigate any governor, you leave my cabinet because we are so marginalised in the past
“They say in the past our poverty index is the highest.
“So, what has this castigation of other governors helped us to achieve?
“Different cultural groups in Igboland should be able to interact with one another.
“I believe that these level of intellectuals should provide different road map in terms of providing what should be the need of our people in the South East in terms of talking to our very wealthy brothers and sisters whose 99.9 per cent wealth are outside Igboland
“These cultural groups should be able to intervene in disputes because nothing is greater than peace.
“Even in our homes, we have differences with our wives.
“How do we expect not to have differences with our brothers?
“But it is by wisdom that we will progress.
“In every of our hate speech, we must note that we have 12 million Igbos outside our land.
“These hate speeches are like igniting another coup.
“So we must be patient.
“What we don’t get can’t be gotten from fight or castigation.”
Presenting their mission statement, the Deputy Chairman of the group Prof. Ejike Chinweite, representing Nwabueze, explained that the group came into existence in the fourth quarter of 2013, with the objective of actively contributing to the dimensional fight, to add value to the collective effort to uplift the Igbo nation.
He added that the group was aimed at providing intellectual perspective to Igbo people’s participation and competitions with other nation group in Project Nigeria.
While he paid tribute to Ohanaeze as the apex socio cultural group in the Igbo nation that had served the thought of Igboland for over four decades with degree of competency, Chinweite noted that the group has excellently distinguished itself well and made undisputed effort in moulding the Nation, adding that the Igbo cannot accept the position of last in the queue in the affairs of the Federal Republic of Nigeria.
Chinweite, who disagreed with the saying that the Igbo has no competent and conducive leadership, said the group was poised to correct the unsatisfactory state of affairs, insisting that the agitation for Igbo identity must be a multi faceted one.
While congratulating the Governor for his second term election, he commended his developmental strides, leadership ingenuity in Ebonyi State in particular and the South East in general.
He said they were in the State to interface with Umahi on matters of importance to the zone as well as encourage his innovative ideas in governance.