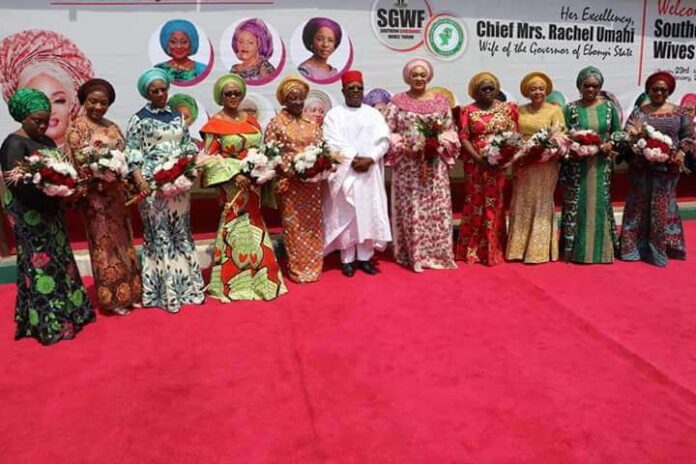 The Chairman,  South East Governors Forum and Governor of Ebonyi State, Engr. David Umahi, has assured Nigerian Governor’s wives that their husbands are not in competition against each other.
Umahi gave the assurance on Friday when he received the Southern Governor’s Wives Forum on a courtesy call at the Government house Abakaliki.
The women were in the State for their quarterly meeting hosted by Governor Umahi’s wife, Rachael.
Umahi, who admonished the women to ignore media hypes portraying their husbands as being in battle, noted that each Governor was faced by his State’s peculiar challenges, which he constantly strives to address.
He emphasised that the mutual synergy, cooperation and exchange of ideas and concepts has been badly misconstrued by the media as competition, adding that learning from each other by the Governors has enhanced mutual development among States.
Umahi said: “Let me encourage you: do not mind the media problems.
“Governors are not in competition.
“We meet various challenges in our States
“One may be building hospitals, another may have met poverty ravaged people, while the other may have medical challenges and so on and so forth.
“God brings up Governor’s in different parts of the country to solve different problems.
“The only competition we have is within ourselves, and so no governor is competing with the other.
“So, when the media put Governor’s in competition, they are wasting their time.
“We learn from one another but the fundamental challenges of our States are the callings that God has called us.”
Umahi, who is also co-chairman of the Southern Governors Forum, commended the wife of the President, Aisha Buhari, for initiating the Governors Wives forum, describing the forum as veritable avenue for complementing the developmental efforts of the Governors.
He further commended President Muhammadu Buhari for the sustained fight against corruption and what he described as the President’s non partisan stance in dealing with the Governors
He however, advocated for a change in tactics by the anti-graft agencies and others involved in corruption war, observing that the tactics of media trial in fight against corruption was responsible for the high corruption rating of Nigeria by the Transparency International.
Commending the Governors wives for their various achievements in their States, Umahi pledged the Governors deep support to them in their programmes.
Umahi summed: “We thank the mother of the nation for putting this forum together; for loving the nation and for being there for us.
“And I want to assure you that we are supporting Mr. President as Governors.
“The president Commands our respect and I can boldly say that Mr. President has never shown partisanship in dealing with the Governors of Nigeria.
“He has done less of party matters and more of nation building.”
In her remarks, the President, Southern Governors Wives Forum and wife of Edo State Governor, Betsy Obaseki, commended the overwhelming developmental strides of Governor Umahi, especially in the areas of infrastructure and Agriculture.
Obaseki explained that they were in the State to observe their quarterly rotational meeting through which they synergise to generate greater impetus towards national development and unity beyond party lines.
She noted that the SGWF was set up by the wife of the President, Aisha Buhari, as a replication of the Northern Governors Wives Forum, which had been in existence in the North.
Obaseki, who acknowledged that there was a lot of work to be done in Nigeria, added that the forum has offered them the avenue to not only foster unity but to collaborate in offering impactful roles towards regional and national development.
The women, expected to spend three days in the State, would engage Ebonyi women in a town hall meeting at the State Ecumenical Centre as well as empower some women as part of their lined-up activities.