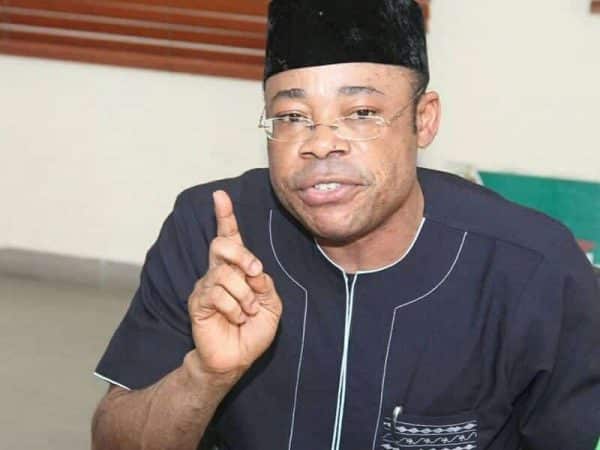 The Governor of Ebony State, Engr. David  Umahi, has called on churches not to join the bandwagon of those spreading hate speeches across in the country.

Umahi, at the  2017 Father’s Day celebration by the Christ Embassy in Abakaliki on Sunday, pointed out that hate speeches were capable of igniting war in the country.

“We need to pray for our nation,” the governor went on to admonish churches, pointing out: “War is not a good thing.”

Umahi, in a statement by his Chief Press Secretary, Emma Anya, added: “ I want us as a church not to join the bandwagon of such spreading of hate. No matter how much you are despised or maltreated, the word of God still tells us to show love.

“Those who are beating the drums of war have not witnessed war before . If there is war, the church will no longer come together  I believe with our prayers, we can avert every plans of the devil.”

Umahi also used the occasion to encourage  the people not to depend so much on government but to work hard  to overcome the economic challenges facing the country.

He urged Ebonyians and non-Ebonyians resident in the state to take advantage of his  administration’s empowerment schemes by engaging  in productive ventures.
The governor also advised those who are making it big in various fields to carry others along, pointing out that such behaviour would help in the propagation of the gospel.

“But let me tell you that there  are many international finance houses that are not ready to give money to government but ready to give to the  private sector. Those  who are doing something can accommodate one or two persons and lead them in the ways of the trade and the kingdom of God will expand.”

Earlier, in her  sermon, the Pastor in charge of  the  church, Eunice Oyeyemi, advised fathers to be alive to their responsibilities in order to have  peaceful homes.

Oyeyemi also admonished them to have respect for their marriage vows.

She told the women to respect and support their husbands even in time of difficulties.

Governor Umahi, in company with his wife, Rachel, later visited the Motherless Babies Home in the city to celebrate the day with the children there.

He prayed  and made a cash donation to them.