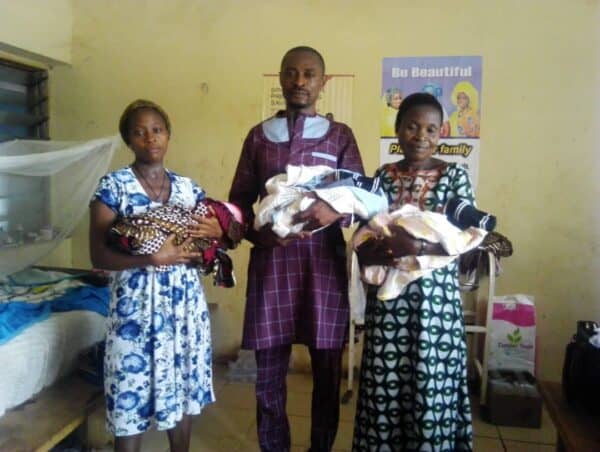 The Ebonyi State Government has come to the aid of a displaced mother of triplets, Lucy Mgboke, and her family following report on her predicament in one of the dailies.
Ngwoke and her family were among those displaced from their homes in some parts of Agbaja Unuphu community in Izzi Local Government Area of the state by the the past Governor, Martin Elechi.
The family’s land was acquired by the past administration for development of a new city in Abakaliki metropolis, Ocho-udo City, now renamed Centenary City.
Ngwoke, who already had five children with the husband having no meaningful job, delivered a set of triplets on July 29, 2019 at the Mother and Child Health Centre, Azuiyiokwu, Abakaliki.
Since then, the precarious condition of the family was aggravated as the new babies added to their already unbearable burden.
Coupled with that was the fact that they had no decent accommodation neither did they have money to pay for their hospital bill.
Although a non-governmental Organization, Indigent Care Foundation, recently came to their assistance by offsetting their N25,000 medical bill and offering some remedial helps, the woman and her family’s condition still left so much to be desired.
Moved by their plight, Governor David Umahi on Thursday directed the Commissioner for Women Affairs and Social Development and all the Special Assistants on Women Affairs to team up, search out the woman and her family and rent a decent apartment for them.
Umahi also directed that the mother and her triplets be sent back to the  hospital for proper medical evaluation.
Umahi, who was away to Bayelsa State on official assignment when he got the report, further directed that the cumulative bill, including two years upkeep allowance for the mother and her children, be articulated and brought to him.
Umahi added: “I apologise to the woman on behalf of Government, even though it was not under my administration but governance is a continuous process.”
Mgboke’s story also had it that their only source of sustainable income was their 12 bedroom bungalow, which was destroyed following the acquisition of the land by the past administration since around  2012
According to her, no compensation was paid to them.
Recall that Governor Umahi had  last year initiated actions towards total resettlement and rehabilitation of the displaced parts of the community, which is still ongoing.