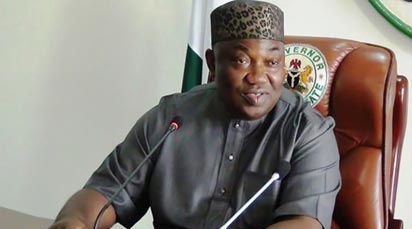 Speaking at the event in Enugu, Ugwuanyi, who is also the club’s president, said his administration would continue to pay special attention to sports development in the state.

The governor also pledged to assist the new executive of the club in taking the 92 year-old club to greater heights.

While congratulating the new executive, Ugwuanyi urged club members to support the chairman and his team in bringing the club to its past glory.

The Chairman of the occasion, Chief Anayo Onwuegbu, emphasised the importance of sports in health and national development.

Onwuegbu urged the people to engage in sporting activities, including walkout, tennis, squash in order to keep fit and ensure a healthy living.

He congratulated the Nwosu-led executive on their elections and urged them to carry other members along in performing their duties.

The former Chairman of the All Progressives Grand Alliance, Chief Victor Umeh, and the governorship candidate of Peoples Democratic Party, Chief Valentine Ozigbo, urged Igbos to support the club.

Umeh used the occasion to call on Anambra indigenes home and abroad to participate in the November 6, 2021 governorship election in the state.

In his remarks, the new chairman pledged to transform the club and restore the dilapidated structure to functionality.

Nwosu said the club required over N100 million to renovate its infrastructure which had been in deplorable condition.

Nwosu thanked Ugwuanyi for his unalloyed support to the club and appealed to well meaning Nigerians to assist in bringing the age-long club back to life.

The News Agency of Nigeria reports that the Enugu Sports Club was founded in 1929 and membership include Nigeria professionals, top government functionaries, captains of commerce and industry.