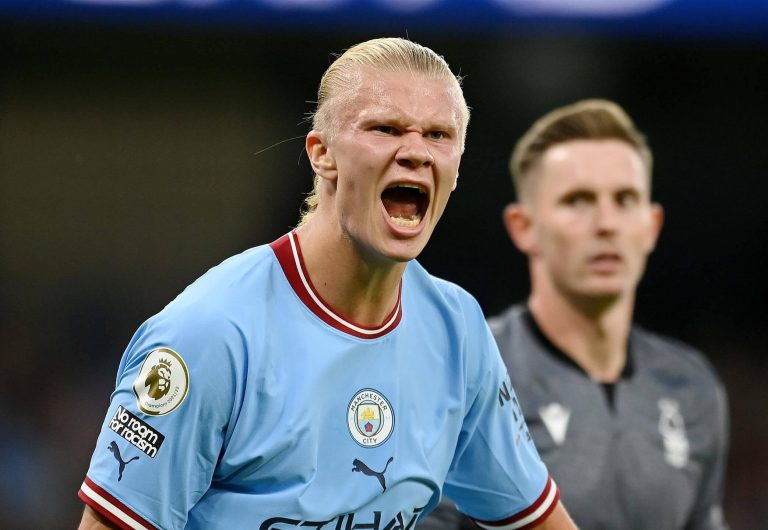 Erling Haaland haunted his former club as Manchester City were forced to come from a goal down to beat Borussia Dortmund 2-1 on Wednesday and put one foot in the last 16 of the Champions League.

The Norwegian had been kept remarkably quiet, but only needed the slighted glimpse of goal to extend his scoring streak to six games as his telescopic left leg prodded home the winner six minutes from time.

Haaland has now scored 13 goals in his first eight competitive games for City since they met his bargain £51 million ($58 million) buyout clause from the German giants.

Jude Bellingham had given Dortmund the lead 11 minutes into the second half.

But a triple substitution awoke City from their slumber and two goals in four minutes turned the game around.

John Stones’ piledriver from outside the box levelled with the aid of some poor goalkeeping from Alexander Meyer.

Haaland then took centre stage by somehow stretching to meet Joao Cancelo’s cross and beat Meyer at his near post.

Victory sees City open up a three-point lead at the top of Group G, with Dortmund still in second after FC Copenhagen and Sevilla played out a 0-0 draw in the Danish capital.

Bellingham admitted on the eve of the game he had no idea how Haaland can be stopped.

But the Germans did a good job of suffocating the service to their former star striker as the first 45 minutes passed with barely any goalmouth action to note.

The visitors were also first to threaten when the first big chance did arrive five minutes into the second half.

An incisive counter-attack fed Marco Reus inside the area and he left another former Dortmund man Manuel Akanji on the ground before bending his shot inches wide of the far post.

City did not heed the wake up call as four minutes later, Dortmund did break the deadlock.

Bellingham has been strongly linked with a move back to the Premier League with City, Manchester United and Liverpool reportedly interested.

The England international was quick to shut down speculation over his future on Tuesday and may have added a few more millions to his price tag as he timed his run perfectly to head in Reus’ cross.

Guardiola responded immediately with a triple substitution as Bernardo Silva, Phil Foden and Julian Alvarez were called upon to add more guile in the final third.

Foden nearly created the chance Haaland had been waiting for all night with a purposeful run into the box and low cross that required a brilliant last-ditch interception from Mats Hummels.

When City’s equaliser did arrive, it came from an unlikely source as Stones blasted home his first Champions League goal since 2017 from outside the box.

Haaland was not to be denied the headlines, though, as Cancelo’s inventive cross with the outside of his right foot was pounced on by City’s giant number nine who raised his foot to head height to flick the ball home.