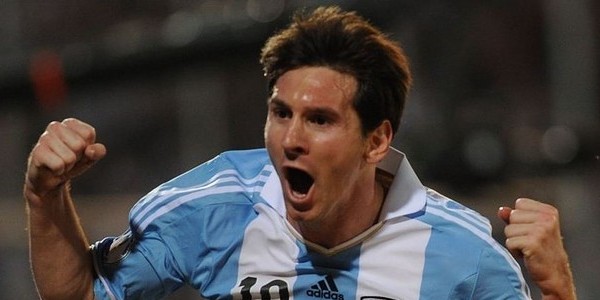 Lionel Messi scored twice as European champions, Barcelona, recorded a 2-0 victory in the first leg of their Champions League last-16 clash away to Arsenal on Tuesday.
Barcelona failed to record a single shot on target in the first period, but the Spanish outfit improved after the break and made the breakthrough in the 71st minute when Messi fired home from close range, before the Argentine netted his second from the penalty spot seven minutes from time.
The first-half chance of the match arrived in the eighth minute when Mesut Ozil found Aaron Ramsey inside the Barcelona box, but Javier Mascherano was on hand to make the block.
Messi had a half-chance for Barcelona just past the 30-minute mark after the Argentine was picked out by Neymar, but the attacker’s header was over Petr Cech’s crossbar.
Barcelona’s potent front three struggled to make their mark in the opening 35 minutes, with Messi firing a poor free kick into the base of the Arsenal wall 10 minutes before the end of the half, before having a powerful strike deflected wide of the post.
Neymar, Messi and Suarez finally managed to combine in the final moments of the first half, but Suarez could not fashion a clear strike from a wide position, before the Uruguay international headed just wide from a super Dani Alves touch.
Arsenal were impressive in the opening 45 minutes, but they had to ride their luck in the final moments.
Neymar had a wonderful chance to send Barcelona ahead in the 49th minute when Andres Iniesta put him through one-on-one with Cech, but the Arsenal goalkeeper was on hand to make a fine save.
Olivier Giroud came close to sending the home side ahead on the hour after meeting an excellent cross from Mesut Ozil, but his header was kept out by Ter Stegen during a lively period of the contest.
Barcelona finally made the breakthrough in the 71st minute when Suarez released Neymar down the left – the Brazilian turned on the burners before squaring for Messi, who touched the ball inside before firing into the back of the net.
The hosts almost had an unlikely equaliser moments after their post was rattled, but Ramsey just could not stretch to meet a knock-down from Danny Welbeck.
Barcelona had their second in the 83rd minute, however, when Messi converted from the penalty spot after Mathieu Flamini dangled out a leg inside the Arsenal box.
Neymar came close to making it 3-0 in stoppage time, but Cech made a smart stop to keep the score down.
Arsenal will travel to Camp Nou for the second leg of the last-16 contest on March 16.