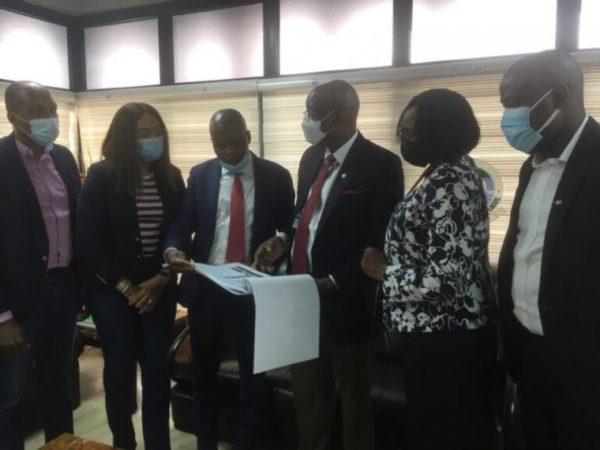 The United Bank for Africa on Friday received a parcel of land to construct a permanent site at the University of Lagos after over 30 years of operation from a makeshift building.

The plot, donated by the University of Lagos, is for the construction of a four-storey building by UBA.

Receiving the piece of land, UBA’s Deputy Managing Director, Ayoku Liadi, said the bank would continue to improve on its long standing relationship with the university.

Liadi said the donation would usher a stronger partnership between bank and the university.

He said the bank was the first to be established on the campus, adding that it could boast of a strong portfolio.

He said: “I feel highly excited to receive this piece of land on behalf of UBA; the reason is that I started the process of getting this permanent site from the university about five to six years ago.

“Today, it has come to reality.

“It is a stronger partnership we are going to have with the university, with this proposed iconic building.

“It is going to be a four-storey building; we see it as an opportunity to have a permanent location on campus.

“UBA is the first bank on the campus.

“And if you look at the fact that we have been here for such a long time, having a permanent site that befits that relationship with the university should be considered in order and important.”

According to Liadi, establishing a befitting building will further enhance the bank’s operations and relationship with the entire university community.

He said: “The relationship between the bank and students of this institution is as old as the university itself.

“We have a professorial seat running with the Faculty of Business Administration, which we instituted about 30 years ago.

“We revived it about four years ago and today, we have a professor of finance, who we have sponsored to conduct research on behalf of this university and UBA.”

Liadi said the construction would begin as quickly as possible.

He said: “We hope to complete the project in 18 months.

“I must thank the university community as a whole for patronage.

“Our portfolio is growing.”

The Vice-Chancellor of the university, Prof. Oluwatoyin Ogundipe, said the bank had a strong presence in the institution, noting that it was funding some students’ projects and programmes.

Ogundipe said: “We have a very cordial relationship with UBA.

“The bank has a very strong presence on campus, being the first to be cited on this campus.

“I want to say that UBA was the first bank to be in the University of Lagos.

“So, there is a strong tie between UBA and the university.

“In the next three weeks or thereabout, the bank is going to move to this permanent site to start construction of a befitting UBA building.