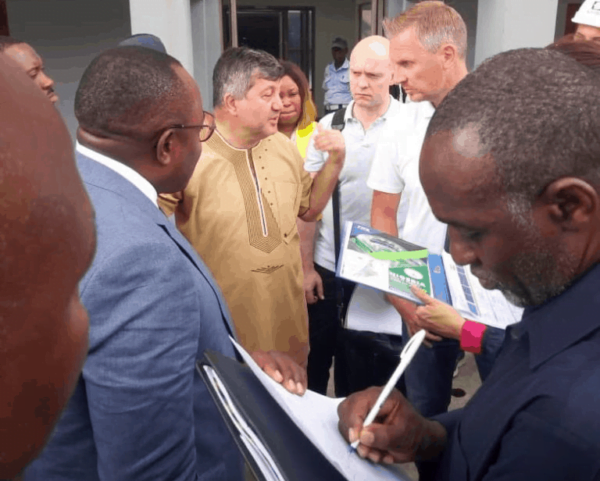 The Federation of International Football Association has expressed satisfaction with the state of facilities at the Stephen Keshi Stadium, Asaba.
Head of FIFA inspection team, Kaj Heyral, expressed the feeling at a news conference on Wednesday in Asaba, shortly after the team had inspected facilities at the stadium.
Nigeria is bidding to host the 2020 FIFA U-20 Women World Cup and the Stephen Keshi Stadium has been designated as one of the host centres.
Heyral said: “We are pleased with the facilities here; I must say that we are impressed with what is in place here.
“When we get back, we will sit and discuss based on our observations and see how best the facilities will be used for a successful tournament.
“FIFA is committed to ensuring adequate preparations are put in place and that is our major concern.”
Also speaking, Nigeria’s Bid Coordinator, Mainasara Illoh, said the stadium was one of the stadia to host the tournament if FIFA approved Nigeria’s bid.
Illoh lauded the Delta Government for the state-of-art facilities at the stadium, and expressed hope that FIFA would award Nigeria the hosting right.
He said: “Today, we are here with the FIFA team to see the facilities as part of our readiness to host the 2020 U-20 female world cup.
“What we are doing now is part of the bidding process but FIFA has the final decision.”
Also, the President of Nigeria Football Federation, Amaju Pinnick, described the stadium as a fantastic facility.
He said the facilities at the stadium were capable of hosting a major tournament.
He said: “What we have here in Asaba is a beautiful and wonderful facility and they can attest to that.
“In fact, the facility at the Stephen Keshi Stadium, Asaba, is far beyond what FIFA is expecting.
“As you may know, I am a member of the organising committee for FIFA competitions.
“In one of our inaugural meetings, we decided to reduce the conditions for hosting.
“What FIFA is expecting is just a modest stadium with all the facilities working. However, what we have here is far beyond that.”