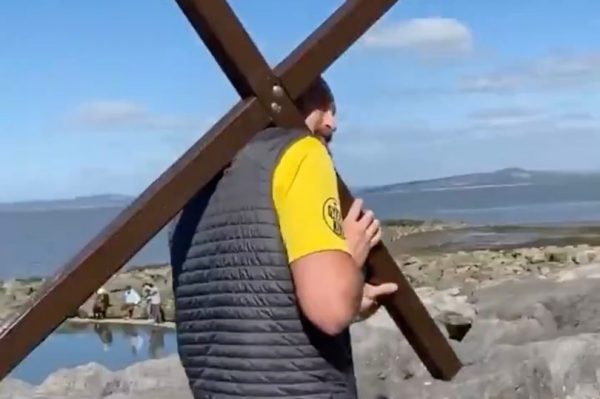 This was shown in a series of posts shared on Twitter.

The two-time world heavyweight champion showcased his stunt and said: “Happy Easter, blessed by God! He is not here, he has risen, just as he said, see the place where he lay.”

In his posts, the 32-year-old Catholic made reference to bible verse Matthew 28:6, which describe the resurrection of Jesus: “The angel answered the women, He is not here, for he has risen, just like he said. Come, see the place where the Lord was lying.”

The resurrection describes how, on Easter Monday, Jesus rose from the dead on the third day after Good Friday.

The Easter story is a cornerstone of Christian belief and a foundation of the religion.

By rising from the dead, Jesus fulfilled his own promise to do so and solidified the pledge he made to his followers that they too would be raised from the dead to experience eternal life.

Fury, who has five children with wife Paris and another on the way, fights under the name The Gypsy King, which stems from his Irish traveller roots.

The couple live in Morecambe.

“I will always be a gypsy, I’ll never change.

“I will always be fat and white and that’s it.

“I am the champion, yet I am thought of as a bum.”