Two suspects arrested in Delta for beating man to death over N3,000 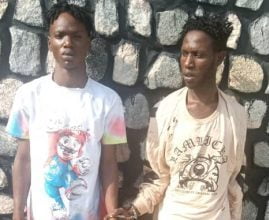 Operatives of the Delta State Police Command have arrested two suspects: Efe Lucky and Ramson Akpojibu, for allegedly beating one Christian (surname unknown) to death for reportedly stealing their N3,000 and phone.

According to a statement by the spokesman of the command, DSP. Edafe Bright, the command had received a distress call on May 3, 2021 that Lucky and Akpojibu had brought a patient, Christian, to Moving Star Clinic, Warri, who was certified dead.

The two reportedly had blood stains on their cloths, and were about to abscond.

The corpse was viewed and signs of violence were seen on the body of the deceased.

The two suspects were arrested and the corpse was deposited at the Orerokpe General Hospital mortuary.

Bright said the police searched the premises of the suspects, and discovered blood stained cutlass, hammer and blood-soaked towel.

The two men confessed that they were five in number that beat up the deceased to death over allegation of stealing their N3,000 and phones.

The police spokesman said efforts are on to arrest the three other suspects, while the Commissioner of Police has ordered that the case be transferred to the State Criminal Investigation Department for further investigation.

In another development, men of the command also arrested a suspected member of the Viking Confraternity, one Etor Lucky, 20, on April 30, 2021.

A cut-to-size locally made single barrel gun was recovered from him, according to the statement.

Also on May 5, 2021, a woman, Jemilia Suleman, 48, and one Monagor Charles, male, age 61, were arrested with military uniforms at Beji Court Hotel, Bendel Estate, Off Airport Road, Effurun.

The female suspect confessed that she bought the said uniform in the market and used it to earn a living.