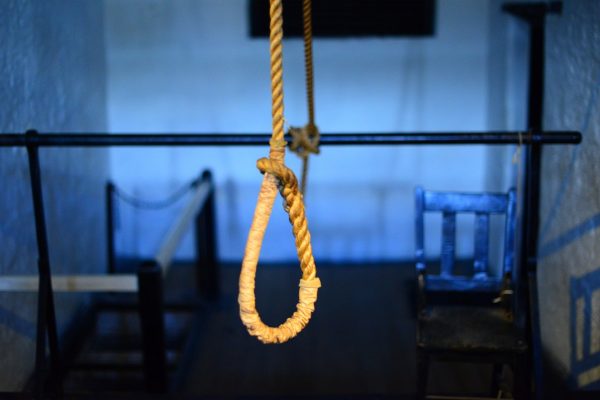 An Ekiti State High Court sitting in Ado Ekiti has sentenced two septuagenarians and four others to death by hanging for the murder of one Sola Adeniyi.
The six persons were: Oniyelu Olu, 63; Folorunso Oluwatoba, 65; Peter Ajayi, 73; Tijani Arowolo, 80, who died during the pendency of the suit; Dolamu Olaide, 29; John Ojo, 77; and Lateef Arowolo, 45.
The News Agency of Nigeria reports that death penalty was pronounced on the convicted persons by Justice Lekan Ogunmoye.
Ogunmoye held that the prosecution had successfully established a prima facie case of conspiracy, attempted murder and murder against the convicts.
According to the charges, the offences run contrary to Sections 516 of the Criminal Code Law, Cap. C16, Section 320 of the Criminal Code Law, Cap. C16 and Section 316 of the Criminal Code Law, all Laws of Ekiti State, 2012.
The prosecutor, Oluwakemi Daniel, told the court that the offences were committed on or about February 7, 2017 at Ilupeju Ekiti.
Daniel said the convicts conspired to murder Adeniyi, 27, and also attempted to murder a commercial motorcyclist, Ojo Olaoluwa, 22.
The prosecutor said Olaoluwa gave evidence that when the second accused person (Folorunso Oluwatoba) stopped him on that fateful day, he was about to mount the motorcycle, he noticed blood dropping from his bag.
She said: “Olaoluwa asked Oluwatoba to open the bag because of police checkpoint ahead, but he told him that it was grass cutter that was inside the bag and that he could not open the bag.
“When it was perceived that the content might be incriminating, he took to his heels and shot Olaoluwa from the back.”
To prove her case, the prosecutor called five witnesses and tendered some exhibits, which included confessional statements made to the police by the accused persons.
Other exhibits were photographs of the severed body of the deceased, medical report from Ekiti State University Teaching Hospital, Dane gun, locally-made single barrel gun and one cartridge.
On conspiracy and attempted murder, all the accused persons were sentenced to five years imprisonment each, except the second accused person who was sentenced to 10 years.
All the accused persons spoke in their own defence through their lawyers, C. O. Omokhafe, S. A. Longe, Busuyi Ayorinde and E. K. Adetifa, but they called no witness.