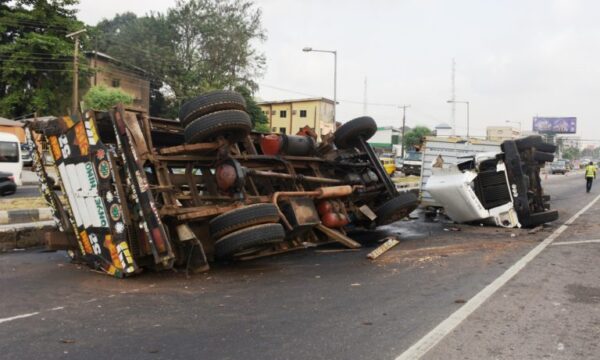 A lorry and a 40ft container-laden truck on Wednesday fell at Obanikoro, Ilupeju area of Ikorodu Road, Lagos State following an accident between both vehicles in the early hours of Wednesday.
An eyewitness, who preferred anonymity, told the News Agency of Nigeria at the scene of the accident that the container-laden truck with registration number KY32SD hit the lorry with registration number AA757-NEN, while overtaking.
The accident caused gridlock that extended to Maryland end of the Ikorodu Road.
NAN reports that security operatives and rescue teams consisting of the Police, Lagos State Traffic Management Authority and the Lagos State Emergency Management Authority Response Team were at the scene to ease traffic flow.
Awodeinde Lukman, Coordinator of the LASTMA team at the scene, said the incident happened in the early hours of Wednesday, adding that efforts were being made to evacuate the affected vehicles.
Lukman confirmed that no life was lost but noted that the driver of the truck was unconscious and had been taken to an undisclosed hospital for treatment.
ASP Alfred Randa of Ilupeju Division of the Nigeria Police told NAN that efforts were ongoing to evacuate the vehicles from the road and to also ease traffic.
Randa said: “The police and other security officials have been deployed to the road to control and divert traffic from the scene of the accident.
“We are also waiting for a fork lift from LASEMA to lift the truck from the road as the initial one they brought could not lift the truck, so they have gone to bring a bigger one.
“Once the vehicles are evacuated, the traffic flow will be faster.”

Lagos cult leader: I was recruited at 12 when in JSS 1