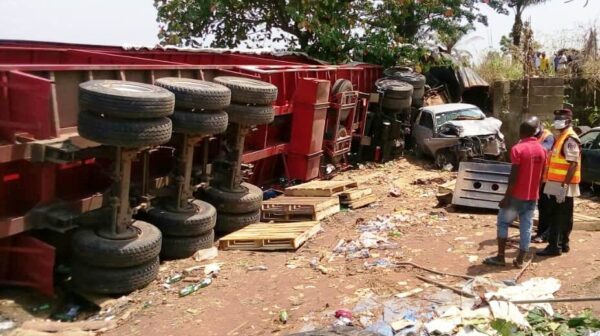 An Iveco truck on Monday rammed into a roadside building, killing a woman at the Obada-Oko axis of the Lagos-Abeokuta expressway.

Babatunde Akinbiyi, the spokesperson for Ogun Traffic Compliance and Enforcement Corps, confirmed the incident to newsmen in Abeokuta.

Akinbiyi said the truck, while competing with another truck on a lane, drove recklessly, lost control of the wheels and rammed into the building at about 8:25a.m.

According to Akinbiyi, the driver of the truck, marked KSF 209 XY, ran away to avoid the wrath of the mob.

“Two trucks were competing for lane, as if they were on a race track.

“The woman had just taken her bath and was trying to apply makeup, to be ready for the day’s job.

“The driver of the truck ran away to avoid angry mob who were desperate to kill him and set the truck ablaze, but for the quick intervention of TRACE operatives and police operatives from Obada-Oko Divisional Police Station,” he said.

Akinbiyi said the relatives of the victim had, however, retrieved the corpse for burial.

He commiserated with the deceased family and implored motorists to avoid reckless and dangerous driving.

Anti-Trafficking Day: Edo to go after assets, properties of traffickers