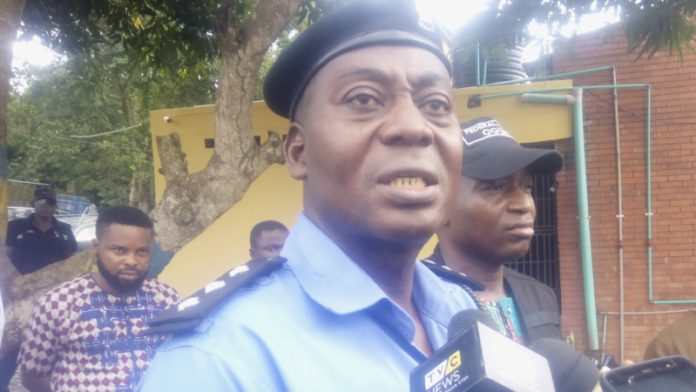 There was pandemonium in Olomore Market, Abeokuta, Ogun State on Thursday morning as dozens of traders protested the alleged shooting and killing of their colleague by police operatives.
The traders, dealing largely in onions, pepper, tomatoes, yam and fruits, went violent as they hurled stones and destroyed property, including vehicles, in the area.
The protesters at Olomore Market were joined by those from the nearby Lafenwa Market, who got wind of the alleged shooting and took to the Lafenwa-Abeokuta-Lagos Expressway, where they disrupted traffic flow.
They also mounted roadblocks with bonfires at various locations, bringing business activities around Olomore area to an abrupt end.
A correspondent of the News Agency of Nigeria, who visited the scene, gathered that some police operatives had chased suspected criminals toward the market and shot at them when they ran into the midst of the traders.
But the spokesman of the Ogun State Police Command, DSP Abimbola Oyeyemi, who later addressed newsmen, dismissed the death claim and shootings in the market by police officers.
Oyeyemi said the Anti-Cultist team of the police moved to Olomore on Thursday morning on receipt of information that there was crisis in the area.
He explained that four suspects were arrested, while some hoodlums resisted the police attempt to whisk them away.
He said: “In a bid to scare those people away, one of the anti-cultist men fired into the air and unfortunately two people were hit by stray bullets.
“The victims were immediately rushed to the hospital and are presently responding to treatment.”
Oyeyemi said the Commissioner of Police, Kenneth Ebrimson, had ordered a full scale investigation into the matter, while the officer who fired the shot had been arrested.
He said: “I want to correct an impression that someone died as a result of police shooting into the market while chasing internet fraudsters.
“It is not true.
“We were not chasing anybody.”
Oyeyemi explained that Ebrimson had visited the area and had consulted with the people, adding: “The situation has been brought under control.”