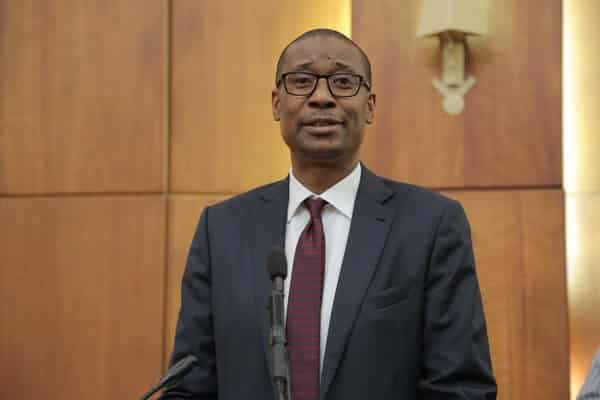 The Ministry of Industry, Trade and Investment has reacted to allegations making rounds in some sections of the media about the recent reforms carried out by the Minister, Dr. Okechukwu Enelamah.
The clarification was contained in a statement on Tuesday by the Communications Advisor to the Minister of Industry, Trade and Investment, Bisi Daniels.
The statement reads in full:
The Ministry under Dr. Enelamah initiated 13 major reforms, some of which are ongoing. They are reforms necessitated by Federal Government development plans such as the Economic Recovery and Growth Plan, the National Industrial Revolution Plan; and the speed of governance.
For example, to accelerate the Nigeria Industrial Revolution Plan, a project to develop world-class Special Economic Zones to position Nigeria as the pre-eminent manufacturing hub in sub-Saharan Africa and a major exporter of made in Nigeria goods and services regionally and globally, was initiated.
Called Project MINE, (Made in Nigeria for Exports), it is to aid structural transformation of the Nigerian economy by increasing the manufacturing sector’s contribution to GDP to 20 per cent by 2025; contribute to sustainable inclusive growth by creating 1.5 million new direct manufacturing jobs in the initial phase; and to increase and diversify non-oil foreign exchange earnings to at least US$30bn annually by 2025, by increasing manufacturing sector exports.
In February, the Federal Government signed investment agreements with three Development Finance Institutions; Afreximbank, Bank of Industry and the Nigeria Sovereign Investment Authority (NSIA) for the development of the project.
The three DFIs are among the five to partner with Nigeria SEZ Investment Company Limited (NSEZCO) and the Ministry of Finance Incorporated. The other investment partners are Africa Finance Corporation (AFC) and African Development Bank (AfDB).
While the recycled allegations on NSEZCO have been debunked by the Ministry on many occasions, it must be noted also that in a meeting with the strategic investment partners at the Presidential Villa last week, Vice President Yemi Osinbajo put to rest rumours about the company.
He condemned the recent misrepresentations that have been created about NSEZCO in certain sections of the media and regretted the embarrassment this may have caused the investors and reaffirmed FG’s endorsement of the strategies and plans put in place for the actualization of the SEZs.
Professor Osinbajo also assured the investors of the readiness of the Buhari administration to offer all the support required to complete their investments in the company.
According to him “it is the vision and plan of the Buhari Administration for the country to be the pre-eminent manufacturing hub in Sub-Saharan Africa and a major exporter of manufactured products.”
He restated the government’s commitment to Project MINE, a Presidential Priority Intervention project, using Special Economic Zones to achieve the objectives of boosting manufacturing’s share of GDP to 20%, generating $30billion in annual export earnings and creating 1.5 million new jobs in the export-oriented manufacturing value chain.
Also, Attorney-General of the Federation, Mallam Abubakar Malami, who was at the meeting explained to the investors that the recent investigation into the affairs of the company was to establish the integrity of the Federal Government and the propriety of its actions in the light of the negative perceptions created in the media.
He also reiterated that the Federal Government has no intention to frustrate investment in the company and its smooth take-off.
Other reforms embarked on by the Ministry include those in Trade and Intellectual Property Registration.
To ensure that trade policy agreements are effectively aligned with domestic regulations, laws and policy priorities that would lead to diversification of the economy, growth, modernization and job creation, the Federal Government established The Nigerian Office for Trade Negotiations (NOTN) in May, 2017. The Federal Government needed a dedicated office with technical ability and expertise that would engage in trade negotiations with nations and multilateral institutions like the WTO.
NOTN coordinates and manages Nigeria’s trade policy, formulate Nigeria’s trade negotiating priorities, negotiate Nigeria’s trade agreements as well as ensure domestic trade-related policy coherence. It is headed by a seasoned Nigerian diplomat, Ambassador Chiedu Osakwe, a Nigerian diplomat who had spent 19 years at the World Trade Organisation (WTO); 15 of those as a senior director at the WTO Secretariat.
Since its establishment, NOTN has made significant contributions to trade policy and negotiations in Nigeria and on the continent of Africa. NOTN is in the process of updating Nigeria’s Trade Policy which was last updated in 2002. In September 2018, it launched the process of preparing a 21st Century Trade Policy for Nigeria, tagged “A Welfare and Prosperity Trade Agenda that Works for All”. This was necessitated by need to meet up with changes in domestic and international environments which has made it imperative to review the policy to reflect the current realities and emerging issues, specifically, trade and investment facilitation, electronic-commerce and digital economy, and regional integration.
Intellectual Property (IP) Registration has been made faster and more transparent.  With the IP reforms the backlog of applications for registration and issuance of certificates dating back to 2012 have been cleared and digitization of the records of the registries has addressed the problems of missing files and inaccessible records.
Also, for the first time in 51 years, since the Trademarks Act came into force, the Acting Registrar of Trademarks issued the Annual Report on the implementation of the Trademarks Act and the compendium of all opposition rulings in the Registry of Trademarks has been published.