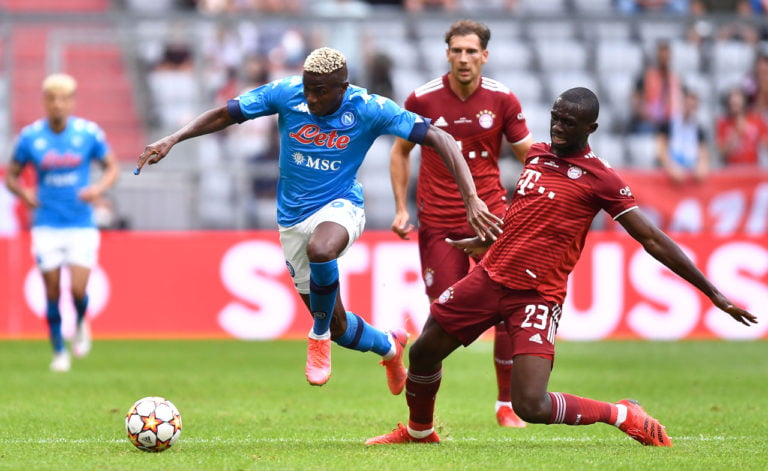 Tottenham Hotspur has reportedly pinpointed Napoli striker Victor Osimhen as an alternative to Gabriel Jesus, should Arsenal win the race for the Manchester City star.

Antonio Conte and Fabio Paratici are seemingly keen to bring in an attacker as part of their summer rebuild.

Fans hope this will see them compete for silverware next campaign.

Spurs may not be content to sit back and watch their local rivals win the race for Gabriel Jesus.

And it could be a good time to capitalise given that Arsenal boss Mikel Arteta is reportedly growing frustrated with the lack of progress, as the deal has not even progressed to personal terms.

The Brazilian has been offered to Tottenham by City, according to The Times, and the Premier League seems his most likely destination if he is to leave the Etihad this summer.

But if Arsenal win the race or Jesus’s £50 million price-tag proves too hefty, Spurs do have alternatives.

Football.london claimed that Osimhen has been on the club’s radar since he was in Ligue 1 with Lille.

Now playing for Napoli and with an impressive Serie A season under his belt, the 23-year-old Super Eagles of Nigeria first 11 would inevitably command a huge transfer fee.

Osimhen has all the right attributes to thrive in the Premier League as the pacy, physical striker netted 18 goals in 32 matches last term. But Napoli won’t let him go cheap, not least because they shelled out a whopping £73 million to sign him back in 2020.

It remains to be seen how Spurs’ plans to lure in a new striker fit in with the talismanic Harry Kane.

Not many top players would be keen on a move to north London if their primary role is to serve as back-up to the England captain, and several former Tottenham strikers have seen their stock plummet in recent years due to the difficulty of displacing him.

Unsurprisingly, the Lilywhites are not the only club chasing Osimhen, although no suitors have made any serious progress due to the Nigeria striker’s anticipated price-tag.

Conte would have to work his powers of persuasion to drive Napoli down after two solid goalscoring seasons in Italy.