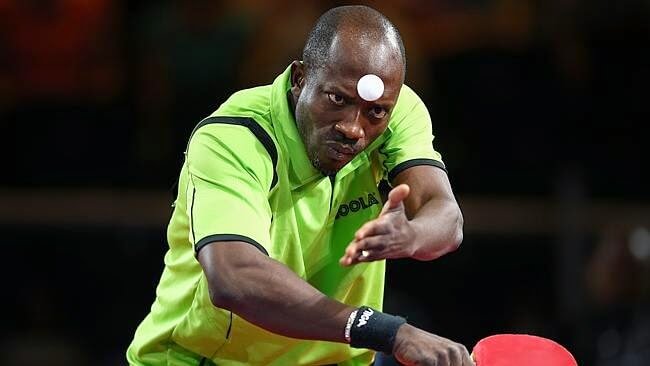 A record eighth Olympics Games appearance for Nigeria’s Segun Toriola was halted by Egypt’s duo of Omar Assar and Dina Meshref after Toriola and Olufunke Oshonaike lost in the mixed doubles finals of the Africa Olympic Qualifying Tournament at the weekend in Tunis.
Toriola was aiming to become the first African and indeed table tennis world’s first player to attend eight Olympic Games, an ambition the Egyptians halted in a thrilling encounter in the Tunisian capital.
Oshonaike had earlier on Friday booked her historic place in Tokyo 2020 as the first African female athlete to attend seven Olympic Games.
There was a hint from the start of the match that it might not go the way of the record-chasing Nigerians as the Egyptians raced to an 11-6 win in the first set.
They cemented their hold on the match with same score win in the second set and eventually triumphed 11-7 and 11-2 in the last two sets to claim Africa’s sole slot in the mixed doubles.
Toriola described the result as “disappointing.”
However, he was grateful to God for the opportunity to feature in seven Olympic Games.
“I wanted to try to make it to my eight Olympic Games. Unfortunately, I could not but in all I am very happy with my career to become the first African to attend seven Olympic Games. I hope upcoming players will take it from here. Olympic Games for me has been a great experience,” Toriola said.
Meshref lauded the records set by Toriola and Oshonaike, describing them as “legends of the sport.”