Tony Elumelu, Wizkid hang out in a photo 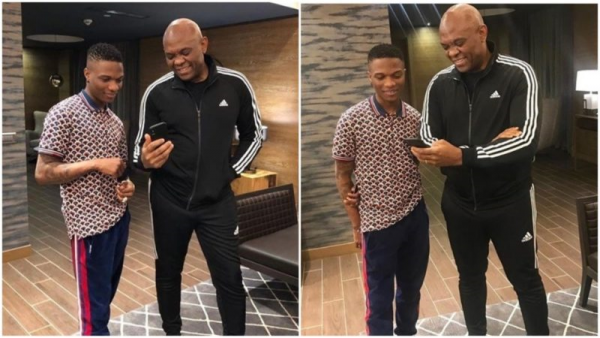 Nigerian singer and songwriter, Ayodeji Balogun, a.k.a Wizkid, was spotted in a photo hanging out with Tony Elumelu, the Founder of Tony Elumelu Foundation.
The News Agency of Nigeria on Tuesday reports that Wizkid was ranked 5th on Forbes and Channel O’s 2013 list of the Top 10 Richest/Bankable African Artists.
In February 2014, Wizkid became the first ever Nigerian musician to have over 1 million followers on Twitter.
He became the first Afrobeats artist to appear in the 2018 Guinness World Records for his contribution to Drake’s hit song “One Dance”.
Also, Elumelu is a Nigerian economist, entrepreneur and a philanthropist and Chairman of Heirs Holdings.
The duo were spotted in a photo hanging out together and it has been the most talked about photo on social media.
In the photo, the two were seen hanging out together and all relaxed probably sharing a joke as they look at their phones.
Wizkid took to his Instagram page @wizkidayo where he posted the photo and captioned it with a message which sounded like good news.
“UBA X Starboy 2019!! Thank u @tonyoelumelu! #AfricasGlobalBank! #DoneDeal!” he wrote.
NAN reports that, it was not clear what this means for Wizkid’s future and that of UBA, but it looks like your favourite celebrity might have signed a deal.