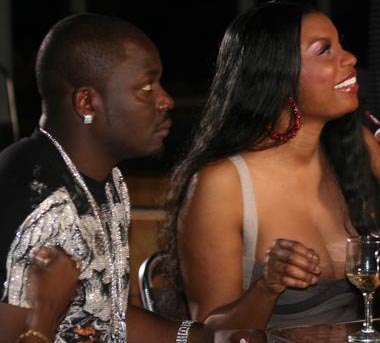 Leah, the controversial daughter of the General Overseer of Christ Apostolic Church, Agbala Itura, Lagos State, Pastor S.K. Abiara, is still the major discourse on the lips of many over the $10,000 she spent on breast enlargement.
The operation, which took place the United States of America, came before her high society wedding at Ibadan, the Oyo State capital, last year, which attracted eminent Nigerians.
The America returnee, who has spent better part of her life in Uncle Sam’s country, is alleged to have spent $10,000 on the operation in a high brow hospital in the United States.
Leah, whom we gathered knew that the operation might have side effects on her in the future, did not care a hoot about the negative effects but instead went ahead for her expensive operation in preparation for her wedding.
If you are opportune to meet Leah now, you will see how bogus her breast is.
Even her buttocks is breathtaking.
This is a result of silicon and other chemicals administered on her during the operation.
However, it would be recalled that before now, Leah has been popular like naira and kobo in the city of Ibadan because of her extravagant life style.
So rich is Leah that she dictates the pace for other ladies in the Pace Setter State.
Aside having fleet of cars in her garage, the tall, leggy celebrity lady spends dollars as if the money is going out of fashion.
Before she got married to her equally controversial husband, Tunde, otherwise known as Nero, her lifestyle had been on the fast lane.