Tobi Bakre did not influence my BBNaija success– Alex Unusual 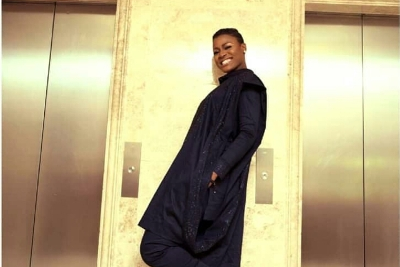 Reality star, Alexandra Asogwa, a.k.a Alex Unusual, set social media on ‘fire’ on Wednesday night, after she insisted that her success in season 3 Big Brother Naija “Double Wahala’ show was not influenced by her pairings with Tobi Bakre and Leo Dasilva.
News Agency of Nigeria reports that Alex also said though she preferred Tobi to Leo; she was not interested in starting a romantic relationship with him as they are just friends.
The dancer, host, model and writer who was the third runner-up of BBNaija: Double Wahala, clearly stated that contrary to popular opinion, the men she was paired with did not contribute immensely to her long stay in the show.
According to her, although she had a good run with Leo and Tobi while the pairings lasted, they did not make her rather, it was her personal choices and decisions that took her to the finals.
The 23-year-old was first paired with Leo at the beginning of the show which blossomed into an emotional relationship. Thereafter, she was paired with Tobi which fast became the fans-favourite ‘Tolex’.
NAN recalls that fans noted that they was a clear difference in Alex’s behavior with the two men especially since she was more expressive when paired with Tobi in the house.
When host, Ebuka Obi-Uchendu asked her if Leo confined her, she said although she is a naturally expressive person, Leo usually advised her to let things go or does not notice things she complained about.
Meanwhile, with Tobi, she could express herself better. She also noted that he was a good support system for her while the show lasted.
She said: “My friendship with Tobi was just there. At least it was fun. He understood me to a great extent and there were times when I couldn’t go on, I wanted to give up and he was there.
“It was cool having someone that saw things the way I saw them and allowed me to express myself (much more than Leo did).
“With him, I wasn’t having to hold a lot of things back because when I tell him, he will be like, ‘I even noticed it myself.”
Still, she insisted that she does not want a romantic relationship with Tobi when Ebuka asked her if she would love them to be “more than friends”.
She replied: “I won’t say I wanted more. Being very close friends, I don’t know what more I would have wanted when you are very close friends. I don’t want to date Tobi.”
Ebuka also asked if she felt like she betrayed Leo seeing that she immediately paired with Tobi despite crying when Leo was evicted.
Alex said: “No, there is one thing I want to get cleared; for me, I don’t think I betrayed anybody or I hurt or did anything bad to anyone in the house.
“I actually feel like everyone that came close to me, I helped or I positively influenced their lives in and outside the house.”
Her responses elicited mixed reactions from fans as she became number one on the Twitter trends from Wednesday night to Thursday morning.
@Sedouke tweeted: “She was obviously holding back something. She wasn’t genuine with her responses at all, even Tobi didn’t look impressed. Wondering why she looked so tensed and up tight.”
Ms_tifey said: “Sharp girl. It’s not everything the whole world must know.”
@Sexyciara123 said: “Alex is the real double wahala trending at no1 and why are you guys trying so hard to force fight on tolex?
“She said so many sweet things about her partnership with tobi! So what is the issue. #bbnaija #DoubleWahalaReloaded”.
@_onenigeria tweeted, “Alex is sad! She is sad. Something’s just not right with her. She’s angry with Leo, Tobi, her make up, everything! #DoubleWahalaReloaded”.
@Erunke said: “Noticed how Ifu was rubbing Alex hands trying to make her careful of what she was saying.”
@Toracledaughter tweeted: “You guys will not downplay Alex’s achievements so far. Alex has always been grateful and thanking Tobi for pushing her, even last night!
“She still said she preferred Tobi who understands her better. But you will not downplay the fact that she is a brand on her own! #Bbnaija.”